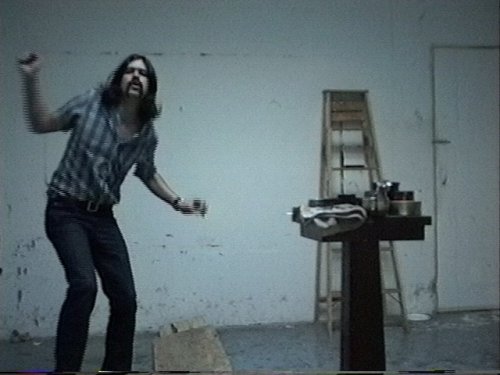 [ad#lb]
In January 2010, the Contemporary Art Museum St. Louis presents the first survey of the early work of New York-based Sean Landers in the United States. Since the 1990s, Landers’ work has been one of the most captivating enterprises in contemporary art, as a practice that has long gamed sincere attempt to map the boundaries of human-nature and the self.

This exhibition proposes that Landers’ formative body of work, produced from 1991-1994, was one that defined the artist, the persona, and the conceptual conceits that he has cultivated and enriched over the course of his twenty-year career. The show presents an overview of the artist’s oeuvre including text works on paper, photographs, paintings, sculptures, and diaristic calendars, with a focus on his performative videos shot in the studio. Across this diverse range of media, Landers presents a holistic set of themes and methodologies, key among them a sincere and unflinching presentation of the artist’s consciousness. Weaving stream-of-thought text or soliloquizing on lo-fi video, Landers presents the artist as an object of study: from the earliest yellow legal pads featuring as autobiographer the fictional artist Chris Hamson, to the reclaiming of the persona by Landers’ own voice. In this relentless articulation of emotion, at its most base and its most noble—from self-loathing, self-doubt, and humiliation, to humility, empathy and true love—Landers’ explores the process of artistic creation through the invention, and simultaneous revelation, of the self.

Sean Landers was born in 1962 in Palmer, Massachusetts, and he lives and works in New York City. He has exhibited widely in the US and internationally. In addition to his 2004 solo exhibition at Kunsthalle Zürich, Landers has been included in shows at Whitechapel Art Gallery, London; Whitney Museum of American Art, New York; Museum of Contemporary Art, Chicago; Kunstverein, Hamburg; the Contemporary Arts Center, New Orleans; Bard College, Annandale-on-Hudson, New York; Wattis Institute for Contemporary Art, San Francisco; the Denver Art Museum; and White Columns, New York; among many others. His work is included in numerous museums and public collections including the Tate Museum of Art, London; the Whitney Museum of American Art, New York; Seattle Museum of Art, Seattle; Los Angeles County Museum of Art; Denver Art Museum; the Walker Art Center, Minneapolis; and the Brooklyn Museum of Art. He is represented by Friedrich Petzel Gallery, New York.