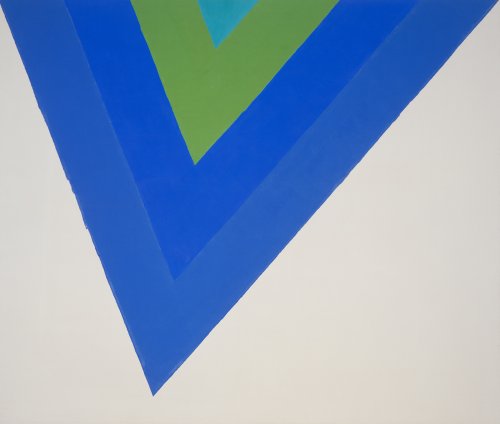 In honor of the late Kenneth Noland (b. April 10, 1924, Asheville, N.C.; d. January 5, 2010, Port Clyde, Maine), the Solomon R. Guggenheim Museum presents Kenneth Noland, 1924–2010: A Tribute, on view in the level 4 Thannhauser Gallery from May 21 to June 20. One of the great American abstract painters of the second half of the twentieth century, Noland had his first major retrospective at the Guggenheim Museum in 1977. Throughout a career that spanned six decades, Noland explored the essential qualities of color and surface in canvases that came to exemplify Color Field painting, a signature of postwar abstraction in the 1960s.

About the tribute exhibition, Richard Armstrong, Director of the Solomon R. Guggenheim Foundation and Museum, said: “The Guggenheim Museum, with its founding history rooted in the support of nonobjective painting, is honored to again share with the public Kenneth Noland’s contributions to the course of abstraction.”

The exhibition is organized by Tracey Bashkoff, Curator of Collections and Exhibitions, Solomon R. Guggenheim Museum.

Kenneth Noland, 1924–2010: A Tribute brings together an intimate group of four of Noland’s seminal works, from the Guggenheim Museum’s holdings and those of private collections, that represent the most distinctive hallmarks of his visual language: circles, chevrons, stripes, and shaped canvases. And Half (1959) is from Noland’s series of concentric-circle paintings, which were begun in the mid-1950s and are generally considered his first mature works. Trans Shift (1964) is an example of Noland’s hard-edged chevron forms, and The Time (1967) features a horizontally linear construction in which the contrasting colors saturate the surface of the canvas entirely—a composition typical of his works from the late 1960s and after. Later, Noland’s exploration of hard edges in his paintings led to his development of shaped canvases, of which Strand (1981) is an example.

Noland was born on April 10, 1924, in Asheville, North Carolina. He attended the nearby Black Mountain College on the GI Bill from 1946 to 1948 before leaving for Paris, where he studied with the sculptor Ossip Zadkine and was introduced to the work of Henri Matisse. During his studies at Black Mountain in the late 1940s and again in the summer of 1950, Noland was affected by the teachings of former Bauhaus master Josef Albers, who was the driving force at the school and who had brought with him from Germany an encyclopedic knowledge of twentieth-century European art. However, Noland’s commitment to pure abstraction derived primarily from his studies with painter Ilya Bolotowsky.

In the 1950s, Noland met critic Clement Greenberg, sculptor David Smith, and painters Helen Frankenthaler and Morris Louis, all of whom influenced his subsequent artistic development. Liberated from the constraints of European modernism and challenged by the groundbreaking work of the Abstract Expressionists, Noland experimented with Frankenthaler’s stain technique of applying thinned acrylic paint to unprimed canvas, fusing color and material. Starting in the early 1950s, Noland began producing a number of works that have been termed “Post Painterly Abstraction” or “Color Field painting” for their large expanses of color with emphases on clarity and control instead of the emotive gesture favored by the Abstract Expressionists.