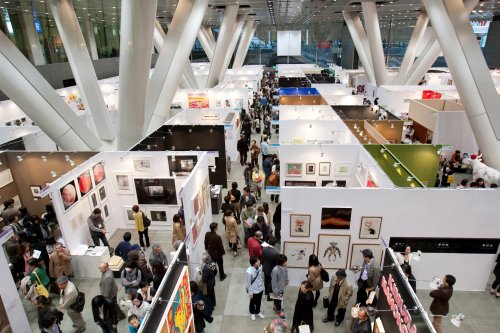 ART FAIR TOKYO, the largest fair of its kind in Japan, began in 2005. This year it celebrates its fifth anniversary. Featuring contemporary art, modern art, nihonga and ukiyoe, in addition to other Asian works of art and antiques, ART FAIR TOKYO is known throughout the world for both the wide genres and periods it covers and for the quality of its exhibits.

Last year’s edition of the fair attracted 45,000 people, an increase on the previous year, and an indication of how interest in art has gradually grown in Japanese society. ART FAIR TOKYO 2010 will be held, as always, at the Tokyo International Forum, and it will include 138 galleries. As with last year, a special section that is devoted to new galleries of contemporary art will be set up, this time under the banner of “PROJECTS.” It will be held in the lobby of the main venue.

Meanwhile, a fascinating selection of related events will be held, including the popular talk series, “Dialogues in Art,” and a range of guided tours tailor made for everyone from art fair beginners to veteran collectors.
Given the current state of the economy, ART FAIR TOKYO 2010 will no doubt be held against a backdrop of continued uncertainty. Yet I feel that it is in such times, in particular, that art has an important role to play in society – to explore such uncertainties and map out new visions for the future. ART FAIR TOKYO believes in both the tangible and intangible power of art, and looks forward to continuing to play a role in the development of the Japanese art scene.

As always, ART FAIR TOKYO 2010 will be held in the cherry blossom season, the most beautiful time of year in Japan. We encourage you to come and savor the best natural and artistic beauty this country has to offer.

Marcus Jansen at 101 EXHIBIT The Poetics of Code