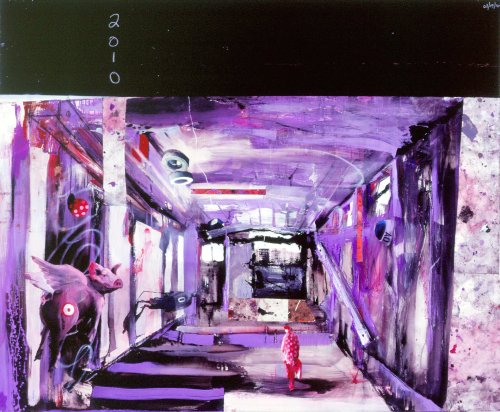 For his long anticipated 2010 solo exhibition, Jansen carries us into the shadows of our 21st century with large and small scale 2009/2010 works that tackle contemporary subjects. His large sweeping urban landscapes show a unique display of apocalyptic dream scapes from the artist’s imagination. His delivery, is a sophisticated blend of complex overlapping layers and compositions. Noted Art Historian Jerome A. Donson (Author of the American Vanguard Exhibitions Europe 1961), worked with many action painters in the past, such as Robert Rauschenberg, Jackson Pollock, Willem de Kooning and Franz Kline. He states in Jansen’s book, “Jansen’s paintings are reminiscent of the Ash Can school. There will be many followers in this style of work, but there will be only one Marcus Jansen.”

Marcus Jansen is a world traveler who spent his childhood living in New York City and Germany. He joined the Armed Forced and eight years later discharged, where he managed transform his life from a Gulf War veteran to an internationally sought after painter. His work can be found in important Art Museums, such as the Moscow Museum of Modern Art (MMOMA), The Kemper Museum of Contemporary Art, The National Taiwan Museum of Fine Art, the New Britain Museum of American Art. Jansen’s art commissions include Ford Motor Company and more recently, Warner Brothers, Hollywood and FIFA World Cup TM 2010 in South Africa.

About the work by Cindy Jane:

With a keen awareness of his surroundings he creates a surreal urban like atmosphere filled with subconscious revelations that foretell of a future fraught with consequence. Violent brushstrokes, changing textures, and instinctive contrast of color reflect an explosive spontaneity that is the direct and raw effect of emotion.

Jansen’s Intellectually provocative and paradoxical work encourages discourse among viewers. Inspired by political and social events of today, he paints his own interpretations as he tries to separate truth from fiction in a world of increasing disinformation. His paintings ask us to look at the world in a new way and to consider not only our interdependence, but also the universal nature of our existence. We are forced to recognize the repercussions of our own apathy and then ask ourselves what are our responsibilities and how much are we willing to sacrifice.

Jansen continues to remind us that progress has a price. In his most recent work, the streets are now filled with the crumbling infrastructure of a previous generation. Isolated figures walk in the aftermath without refuge from the surveillance of new world technology. Spotlights illuminate the scenery, as the stage is set for a virtual wasteland rich in metaphorical imagery.

Cornered pigs wait with targets on their back, as we crossover into Jansen’s suburban landscapes and are confronted with foreclosed homes, receding farms and the scattered debris of industry. A school bus careens head on into a collision, the wheels no longer turning. Sheep graze in once green pastures replaced with the urban sprawl of the forgotten cities.

The themes that run through Jansen’s work are vast in scope and are indicative of his insightful ability to see the correlations that connect them. Genetically modified food, increasing surveillance, the degradation of education, corporate greed, and global dominance are just a few. In his work lies a deeply rooted spirituality that becomes evident by his willingness to explore the unknown. He brings our attention to the things we would normally overlook, while reminding us that within our struggle resides beauty.