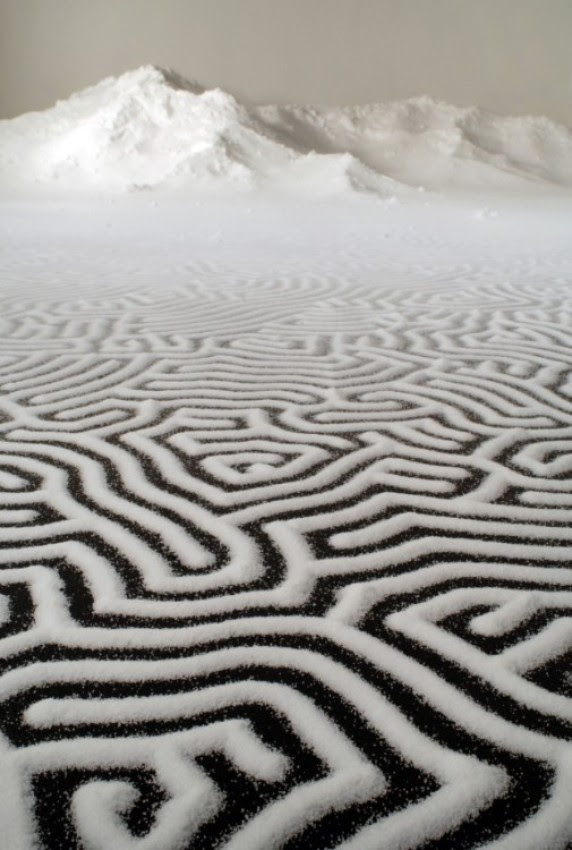 The mainspring of Yamamoto’s work derived from the death of his sister at a young age, and the death of his wife in the fall of 2016.
His works is represented by large – scale labyrinths and patterns for the loved ones who passed away as well as his strong desire to hold on to his memories with them.

Motoi Yamamoto has been using salt for his installation for nearly 25 years since his sister passed away in 1994.
Salt has been an essential part of human lives worldwide. In Japan, salt is a sacred substance used for funerals. Japanese use salt after a funeral in order to purify their spirits from the impurity of death. “I’m also attracted to salt not only because of its cultural and historical background, but also its translucent colors as well as the ocean where it come from as the birth place of all life.
I then began to think that the salt I’m using for my artworks might have been in the ocean at one point, supporting our lives, holding the “memories of life” within itself.”

Drawing a labyrinth with salt is for the artist a way to follow a trace of his memory. In this way he is able to touch a precious moment in his memory which can not be attained through pictures or writings.
He draws all the lines by himself when he works on installation. He never erase or re-draw the lines.
“We all live in the real world where life can not be undone or rewind. Lines I draw reflect myself who is alive in this moment”. But it depends not only on his psychological or physical condition, but also on the condition of the floor or the level of humidity. He always silently follows the trace, that is controlled as well as uncontrolled from the starting point until completion.

The series of works named “Floating Garden” is similar to lacework, an act of slowly rediscovering pieces of memories tucked quietly in the drawers in the mind of the artist, and weaving them together. He draws countless tiny cells with salt or paint and these cells symbolize pieces of memories and fragments of small daily events that he and his sister and his wife shared.
Motoi has been drawing swirls and labyrinths (patterns with lines that intertwine like a maze). Such patterns have been used as a symbols to represent rebirth. Swirls symbolize life and death, resurrection, and rebirth showing a strong vitality and eternity mainly in East Asia. Labyrinths symbolize almost exactly the same aspects in the West, originated from Scotland and Greece.