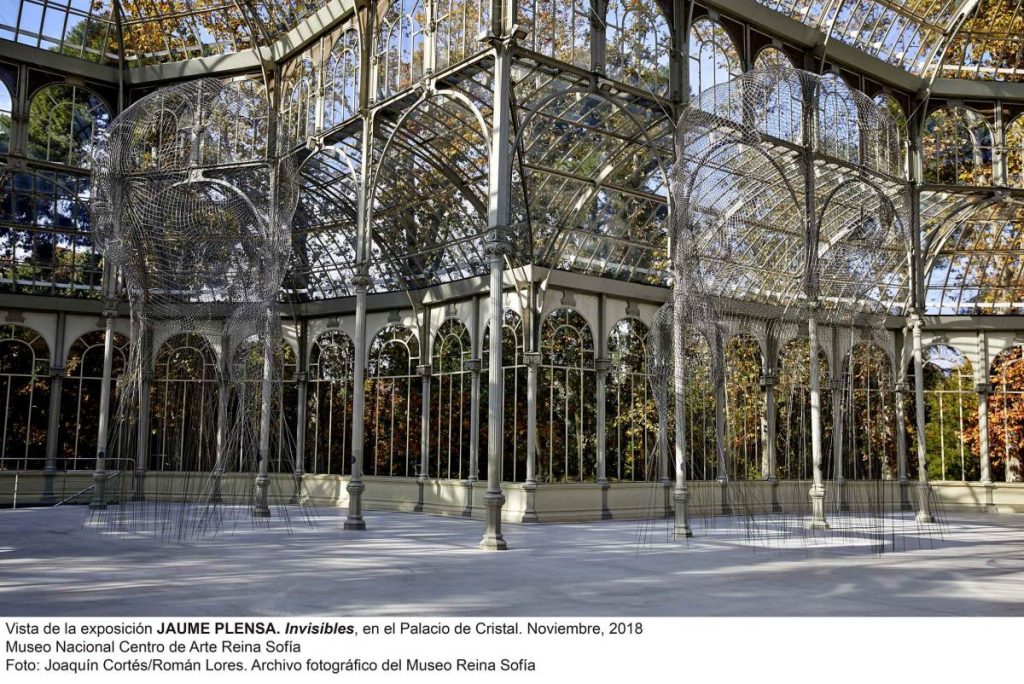 Throughout his career as a sculptor, Jaume Plensa (Barcelona, 1955) has drawn on spirituality, the body and collective memory as the primary sources which tie together his visual artwork. Literature, psychology, biology, language and history become strategic tools in the creation of his work, and, through a broad spectrum of materials — steel, cast iron, resin, glass, water, sound — Plensa lends weight and physical volume to the components of the human condition and the ephemeral.

In this instance, the invisible forms the essence of his intervention in the Palacio de Cristal: a group of steel mesh sculptures which take the space to draw the incomplete faces of figures hanging in the air, intersected by light and suspended in time.

As a multidisciplinary artist and one of the foremost Spanish artists internationally, Jaume Plensa has also experimented with etchings, drawing, sound, video and even stage design, collaborating with the company La Fura del Baus on four classical operas, La Atlántida, El martirio de San Sebastián, La condenación de Fausto and La flauta mágica. He has also lived and worked in Germany, Great Britain, France and the USA, making sculptures and installations for public spaces in the aforementioned countries and in many others, such as Italy, Japan, Canada, Sweden and Thailand.

Following his first solo exhibition in 1980 at the Fundació Joan Miró in Barcelona, his work has been displayed in museums worldwide, including the Madison Museum of Contemporary Art in Wisconsin, the MAMC–Musée d’art moderne et contemporain Saint-Étienne Métropole, the EMMA–Espoo Museum of Modern Art, Helsinki, and the Musée des Beaux Arts in Caen. Moreover, he has received numerous national and international awards: the Medaille des Chevaliers des Arts et Lettres from France’s Ministry of Culture in 1993 and the Premi Nacional de Cultura d’Arts Plàstiques from the Autonomous Government of Catalonia in 1997, as well as Spain’s National Visual Arts Award in 2012 and the prestigious Velázquez Award for the Arts in 2013, both presented by Spain’s Ministry of Education, Culture and Sports. In 2005 he was invested Doctor Honoris Causa by the School of the Art Institute of Chicago.

This project is in conjunction with a retrospective at the Museo de Arte Contemporáneo de Barcelona (MACBA) and features works stretching from the 1980s to the present day in a survey which reflects the dialogue, repeated across Plensa’s career, between the representation of the human figure and abstraction.