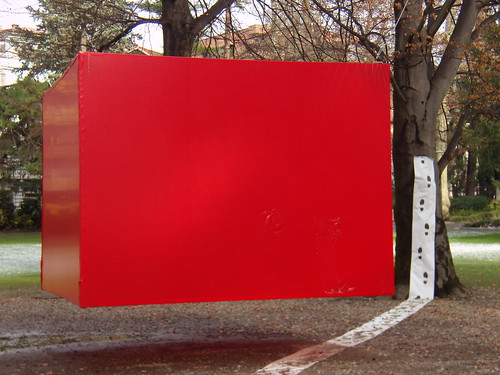 The new cultural centre named LAC takes off for its voyage. The ceremony of laying the cornerstone of the new building took place with a great show on May 8th; now the first season of exhibitions is about to be opened under the new LAC brand.
Of course the new building next to the former Hotel Palace is not there yet: the construction is expected to be ready at the beginning of 2013. What can already be seen is a new approach to cultural events in Lugano: the initiatives will not be isolated, or competing against one another; they are conceived as part of a programme consisting of integrated activities, according to the spirit of a modern, pervasive culture, capable of leaving its mark in the city. The same spirit of unity did lie on the 31st May behind the signature of the agreement of collaboration between the Museo Cantonale and the Museo d’Arte.
This new attitude will be expressed on October 23rd, when the exhibition project Nippon – Between Myth and Reality: Art and Culture from Japan, is opened. This initiative will document centuries of social and artistic culture, embracing tradition as well as present day expressions, putting in the spotlight the elements which recur in the extraordinary Japanese civilization. In is chronological development, this project will unite the whole city and its several exhibition venues “under the Rising Sun”.
Starting from Villa Malpensata, Nippon will unfold along the lake towards the Museo Cantonale d’Arte, Villa Ciani and its park, the Congress palace, the Ciani, and eventually find its natural conclusion at Heleneum. Thus, visiting Nippon will represent also an opportunity to discover the richness and the density of the venues that Lugano dedicates to the promotion of culture.
But Nippon will not consist of exhibitions only: a number of “surprise initiatives” are also scheduled, which will transform some of the main areas of the city, turning it into a small “Tokyo on the lake”. Happenings, meetings and theatre performances will further contribute to this extraordinary project.

Araki Love and Death
Museo d’Arte, Villa Malpensata, October 23rd 2010 – February 20th 2011 Nobuyoshi Araki ranks today as one of the most well-known and celebrated artist photographers in the world with more than four hundred publications to his name.
Despite his great celebrity, Araki Love and Death is one of only a very few retrospectives dedicated to him in Europe. Nobuyoshi Araki’s photography expresses and updates many of the themes most closely connected to Japanese culture. The Lugano exhibition bears witness to the artist’s work in its many varied expressions: in addition to the autobiographical series – including Sentimental Journey/Winter Journey, which documents the relationship between the artist and his wife Yoko from the day of their marriage till the tragic illness and premature death of Yoko in 1990– urban landscapes, the suggestive images of flowers and food, the poetic series dedicated to the sky and, of course, the series of female nudes and bondage which are, more than any other of his subjects, so clearly linked to his renown. From this short list of subjects it is clear just how much Araki’s work expresses Japanese culture, in the exaltation of the changing of the seasons, the ephemeral beauty of flowers, and of feminine sensuality. The artist’s work is not limited to a simple registration of these subjects, but they make evident and almost tangible, even to a Western audience, the perturbing character that they have in Japanese culture. The exhibition mirrors Araki’s urgency to capture the continuous transformation of reality, through a continuous photographic documentation. The display features nearly two thousand medium and large format pictures alongside an impressive installation of three thousand Polaroids
taken by the artist over the years are presented in a highly dense, mosaic format. The audience is both overwhelmed and disoriented by the visual impact created not only by the single shots, but by the greater whole of the images. Finally, and perhaps what makes the Lugano exhibition unique, is the showing of his latest works, including the series dedicated to his beloved cat Chiro and a series of large format photographs over which the artist intervenes with calligraphy, paint and collage which is presented here to the public for the first time.

GUTAI Painting with Time and Space
Museo Cantonale d’Arte, October 23rd 2010 – February 20th 2011
If Nobuyoshi Araki’s work invites the viewer to observe the world through the eyes of a Japanese artist and to seize its sensual charge, the work of the Gutai Group allows to grasp the meaning of concepts as matter and creation and the relationship between artist and nature in the island of the Raising Sun. The Gutai Group was formed in 1954 in Ashiya, near Osaka, thanks to the initiative of painter Jiro Yoshihara together with the young artists Shozo Shimamoto, Chiyu Uemae and Tsuruko Yamazaki. Gutai, which will see the number of its members grow through the years, is active until 1972, the year of the death of the venerated founder Jiro Yoshihara. The activity of the group featured happenings, open air installations, one-day exhibitions, action painting and theatre performances. The exhibition at Museo Cantonale d’Arte focuses on the first and second Gutai period (ca. 1954-1960 and 1961-1964), the most intense and significant phases in the history of the group, when Gutai is actively trying to find new ways of expression. The exhibition aim is to make the audience aware of the importance of the group and of it legacy 38 years after its dissolution. Taking into account a growing interest for Gutai (2009 Venice Biennale), the exhibition focuses not only on action painting, but mainly on the beginnings of the Gutai experience which were featuring performances and installations. The works displayed inside the museum allow the audience to appreciate at first hand works, created by artists by now legendary, which usually are preserved in Japanese institutions, and to seize the peculiarities of abstract art in Japan. The installations will be displayed in an autonomous section in the park surrounding Villa Ciani.
Coherently with Japanese culture, the work of Gutai does not exploit materials in order to express artistic individualities, as it is common in the West. The creations of Gutai express the desire to bring matter to life and reveal its intrinsic qualities. The relationship between artist and matter appears therefore overturned: the artist serves the work, instead of shaping it according to his own sensitivity.

GUTAI Painting with Time and Space
The Park at Villa Ciani, October 23rd 2010 – February 20th 2011 The creativity of Gutai aims to express the aesthetic autonomy of materials. Following this principle the goal of the group is not the production of works destined to be displayed in museums. On the contrary, the art of Gutai often implies a relationship with nature. The exhibition hosted at Museo Cantonale d’Arte has therefore an obvious extension in Parco Ciani. In the park will be recreated some of the most remarkable open air installations devised in the mid-1950s by the artists belonging to the group. Among the works on display will be a long foot-bridge, a bell tower in cloth and a series of nylon festoons containing water pigmented with different colours. Such works offer the observer the opportunity to actively take part in them; they blend into the context of the park, attract the attention of people who are not usually museum-goers, and communicate and covey an idea of the artwork opposed to the traditional one.

Ineffable Perfection. Japan’s Photography. 1860-1910
Curated by Museo delle Culture, Villa Ciani, October 23rd 2010 – February 27th 2010 Villa Ciani plays host to Ineffable Perfection. Japan’s Photography Between 1860 and 1910. This is the largest temporary exhibition of its kind ever to be realised, worldwide. The themed path, the fruit of research carried out by the Museo delle Culture’s team beginning in 2007, takes its audience on a journey of discovery into Japan’s traditional image. Step by step, the visitor is introduced to a more mature vision of the encounter between Japan and the West. The principle themes focus on the representation of the landscape and nature as ‘educated’ by culture, the importance of photographic media in the definition of Japan’s image, the taste for the exotic and the deep relationship between photography and the ukiyo-e prints. The exhibition offers a profound analysis of the works and styles of the main Japanese and European photographers who were active in the period and features a surprising exploration of the historical and anthropological dynamics of ‘travel to the East’ and the ‘aesthetic of the souvenir’. The photographic albums displayed show finely lacquered and engraved covers which are, in themselves, an artistic genre of great interest. The exhibition path itself shows a particularly charming scenographic arrangement, which produces the sensation of walking through a Japanese garden. The exhibition is completed by the presence of some fifty artworks and refined objects of material culture from prestigious private collections. Among these, magnificent samurai armour from the Fifteenth Century, a group of precious sculptures of religious character, a highly refined selection of men’s and women’s clothes and a range of sixteen extraordinary Nō theatre-masks.

Shunga. Art and Eros in Japan During the Edo Period
Museo delle Culture, Heleneum, October 23rd 2010 – February 27th 2011 The natural conclusion to the exhibition path is represented by the display dedicated to the shunga at the Museo delle Culture. The shunga, the Japanese word meaning literally ‘images of Spring’, is a genre of erotic prints whose output peaked during the period of the Tokugawa shogunate, between 1603 and 1867. Briefly summarised, the shunga were an exceptionally vibrant expression of ethical and aesthetic reflections on the brevity and transitory nature of life, sentiments which expressed the values of the middle-classes of the large cities of the time. Tradesmen, craftsmen, physicians and artists were all excluded from political power, but growing in economic strength, proclaimed a hedonistic conception of life, in open contrast with the strict neo-Confucian morals of the samurai who were governing the country. The shunga made real the world vision of those who mocked the political elite’s conservatism, portraying luxury, feasts, theatre shows and the life of the brothels, where the middle classes found the company of women expert in the art of entertainment and love. The exhibition, the fruit of a research programme undertaken by the Museo delle Culture and its partners, aims to guide the visitor towards discovery of an artistic genre that is unusual, but which expresses a deep connection with not only the Japanese life and culture of the time, but with the philosophies and visions of the world of the Eastern civilisations. The selection presents works from the most important creators in the evolution of the shunga genre from Koryusai to Kunimori, and includes a large selection from the most renowned artists, including Kiyonaga, Utamaro, Hokusai and Hiroshige.