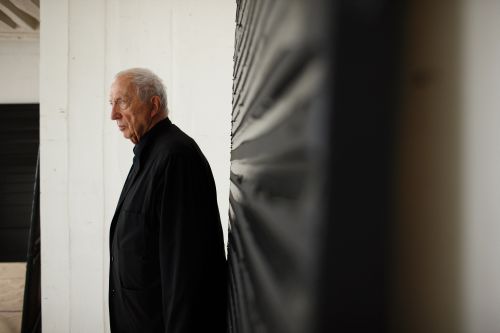 The French Academy in Rome – Villa Medici presents the exhibition Soulages XXIst Century from March 2 to June 16, 2013. The first personal exhibition in Italy dedicated to the greatest living French painter, it presents a vast selection of paintings on canvas and paper created since 2000.

The exhibition entitled Soulages XXIst Century, organized by the French Academy in Rome – Villa Medici and the Lyons Musée des Beaux-Arts, highlights how this master, considered to be the greatest representative of French abstraction and who has been internationally recognized since the early 1940s, is also truly a “contemporary” artist. At over 92, he still continues his in-depth investigation of abstract painting, exploring new possibilities stemming from the demanding premises on which he has based his practice since the very beginning of his activity as a painter.

Since his 1948 tar paintings on glass – one will be shown in the exhibition as a historical benchmark – Soulages has proven that painting, yet more than colour, can be a way to enhance light and space. It is not without reason that he maintained fruitful and friendly relationships with artists such as Mark Rothko and Lucio Fontana in the 1950s. In 1979, he opened a new period, self-penned outrenoir (‘blackbeyond’, i.e. the idea of using black to reveal and organize light), and has since then presented every possible nuance of colour and light only through the use of black, spread over the canvas, yet diversified by the effects of the surfaces. Between 1999 and 2000, after a break of several years, he resumed painting on canvas, opening a new period characterized by a highly varied experimentation. Willing to assert what had only existed marginally before, he started creating families of paintings, which he still explores, more than ten years later: paintings where white is present, paintings which juxtapose smooth and rough surfaces, paintings made from multiplied discrete marks, collages, paintings based on diverse tonalities of black. The works of Soulages are present in the most important exhibitions and collections in the world, and he is widely considered the greatest contemporary French painter. The Centre Pompidou in Paris dedicated an important retrospective exhibition to him in 2009, which was later shown at the Museo Ciudad de Mexico and the Martin Gropius Bau in Berlin.

The exhibition Soulages XXIst Century, at Villa Medici, from March 2 to June 16, 2013, will concentrate on the most recent developments of his work, presenting an important selection of paintings, chosen together with the artist by its two curators: Éric de Chassey, director of the French Academy in Rome – Villa Medici, and Sylvie Ramond, director of the Musée des Beaux-Arts in Lyons.