Icons of Costume: Hollywood’s Golden Era and Beyond 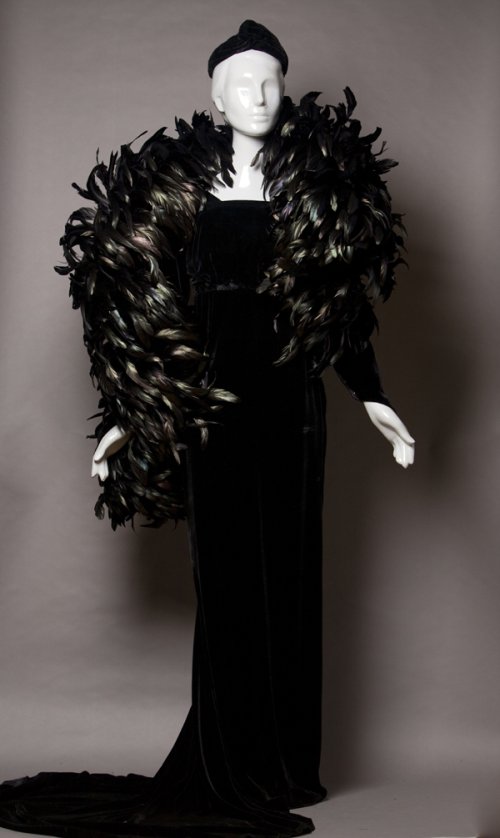 The James A. Michener Art Museum has organized an exhibition of Hollywood fashions worn by such classic stars as Loretta Young, Elizabeth Taylor, Errol Flynn and James Dean, as well as costumes and accessories used in more recent films featuring Harrison Ford, Kevin Costner and Sean Connery. From Marlene Dietrich’s black velvet evening gown from Shanghai Express (1932) to Arnold Schwarzenegger’s black leather jacket from Terminator 2: Judgment Day (1991), Icons of Costume: Hollywood’s Golden Era and Beyond presents over 50 items selected from one of the most extensive collections of movie memorabilia. Rare studio publicity stills, lobby cards and film props augment the experience, and an interactive “Screen Test” area allows visitors to act out their favorite scenes to be uploaded to the Museum’s channel on YouTube.com. The exhibition is on view in the Museum’s Paton / Smith / Della Penna-Fernberger Galleries from April 17 through September 5, 2010.

Icons of Costume: Hollywood’s Golden Era and Beyond is sponsored by PNC Arts Alive, a five-year, $5 million investment from the PNC Foundation to help cultural organizations expand and engage audiences and help area residents gain access to the arts in the Greater Philadelphia region.

The exhibition is comprised of fashions and ephemera drawn from the collection of John Lebold who served as an assistant to eight-time Academy Award-winning designer Edith Head. According to Erika Jaeger-Smith, the Museum’s Associate Curator of Exhibitions who organized this show: “In addition to the importance of these films in our general ‘pop culture,’ the costumes in this exhibition draw attention to the lasting influence of such legendary designers as Adrian, Edith Head, Walter Plunkett, Bob Mackie, Orry-Kelly, Helen Rose and Travilla. These costumes are remarkable survivals, and their impact on today’s fashions is immediately recognizable. The unique aspect of this exhibition is its concentration on the early years in Hollywood.”

Assisting with the exhibition as a consulting curator is costume historian and scholar Edward F. Maeder, former curator of the Department of Costumes and Textiles at the Los Angeles County Museum of Art and principal author of the book Hollywood and History: Costume Design in Film. “Another exciting aspect of the exhibition is the number of Academy Award nominations and winners included,” says Maeder. “Ten of the costumes included in the exhibition appeared in films nominated for an Oscar for Best Costume, five of which took home the coveted prize: Cleopatra (Elizabeth Taylor, 1963), Giant (James Dean, 1956), An American in Paris (Gene Kelly, 1951), The Adventures of Don Juan (Errol Flynn, 1948) and Barry Lyndon (Ryan O’Neal, 1975).”

Underscoring the “Hollywood Golden Era” link with our region, the gallery’s adjacent film theater features an hour-long video of 35 film clips from movies with direct Bucks County connections, such as Casablanca (1942), Lassie Come Home (1943), On the Waterfront (1954) and A Star is Born (1954).

On weekends throughout the run of Icons of Costume, visitors have the opportunity to become movie stars themselves, by dressing up and acting out part of The Wizard of Oz (1939), Gone with the Wind (1939) or Terminator 2: Judgment Day (1991) in the interactive “Screen Test” station within the gallery. Using costume reproductions and props plus provided scripts on cue cards, participants will be filmed for up to two-minute scenes that will be uploaded to the Museum’s channel on YouTube.com.

The Essence of Things. Design and the Art of Reduction Marcus Jansen at 101 EXHIBIT