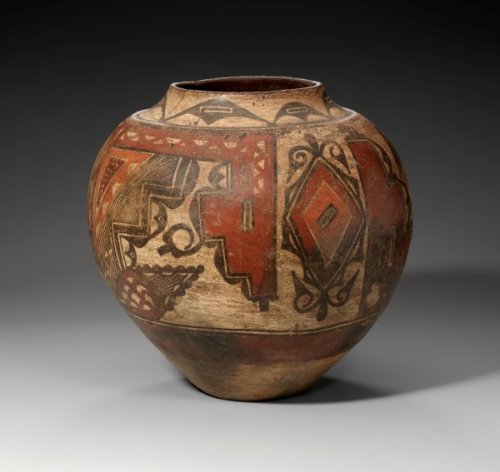 The new galleries are adjacent to the Museum’s reinstalled American galleries, which opened in April. This location reflects a bold philosophical shift at the Nelson-Atkins, defining the art of Native peoples as an essential part of our nation’s heritage.

“It is our intent to present American Indian art as an important part of America’s cultural legacy,” said Marc F. Wilson, the Menefee D. and Mary Louise Blackwell Director/CEO at the Museum. “Together, the American galleries and the new American Indian galleries will provide visitors with an uninterrupted, contiguous look at the achievements of American artists from pre-European contact to the present, something rarely if ever done by a fine arts museum.”

The galleries will showcase nearly 200 works of American Indian art, including a number of recognized masterworks. While the cultural and historical significance of each object is acknowledged, the primary focus of the installation is artistic quality, in contrast to displaying works as cultural artifacts or historical relics of past civilizations.

The Nelson-Atkins’ effort to expand the collection and reinterpret its presentation has been led by Gaylord Torrence, the Fred and Virginia Merrill Senior Curator of American Indian Art. Torrence, who arrived at the Nelson-Atkins in 2002 as founding curator of the Museum’s first Department of American Indian Art, is recognized as one of the nation’s foremost authorities in the field. “The Nelson-Atkins has benefitted greatly from Gaylord’s vision, passion and expertise,” said Morton Sosland, a Kansas City businessman who has supported the initiative. “He has focused the Museum’s original collection and dramatically expanded the number of key historical
and contemporary works.”

The involvement of the community, contemporary Native artists, scholars, collectors and dealers has created what Wilson terms “a unique grounding for the Museum’s initiative.”

“The Nelson-Atkins is strongly committed to the recognition of American Indian art, and we are equally committed to exhibiting the work of contemporary artists in addition to those of earlier periods,” Wilson said. “We believe these new galleries will place the Nelson-Atkins in the forefront of America’s general art museums exhibiting in the field.”

“It is our goal in this new installation to present the extraordinary vision of Native American artists, from many cultures and throughout time,” Torrence said. “These objects communicate the creative expression of their individual makers; at the same time, they reflect the profound cultural traditions that underlie the meaning and power embodied within each work.”

New Installation and Collection Highlights
Grouped by eight main culture areas of North America, the new installation will include masterworks from a wide spectrum of cultures from pre-European contact to the present, including Woodlands, Plains, Southwest; Plateau; California and the adjacent Great Basin, Northwest Coast and Arctic. Navajo textiles, Woodlands and Plains quillwork, beadwork and sculpture, Pueblo pottery, Southwestern jewelry, Northwest Coast sculpture and California and Plateau basketry are among the artistic traditions represented in the Museum’s collection.

Select acquisition and new installation highlights on view in the new galleries include:

A rare, late 18th-century Ojibwa coat. This buffalo-skin coat embodies the dynamic cultural exchange that characterized the beaver trade during the North American Colonial period. It reflects a complex blending of Woodland and Plains Indian artistic traditions as well as European fashion, patterned after an English officer’s coat of the period of George III. It is one of only 18 known examples of its kind and the only example in an American public institution.

A contemporary work by the artist Roxanne Swentzell, Kosha Appreciating Anything, 1997. Recognized as one of the leading contemporary Native American artists, Swentzell continues the long tradition of Pueblo figurative sculpture, which includes objects produced for both ritual purposes and the outside market. This sacred being – a Pueblo clown, or Kosha – stares at his hand as though realizing for the first time its complexity and, through it, the mystery of life.

An 1850 shield, a masterpiece of Plains Indian visionary painting. This shield and cover (shown on front) from the Arikara is embellished with the image of a buffalo bull, the owner’s guardian spirit, which would have been revealed to him in a vision during a prolonged period of fasting and prayer. The intensity of the artist’s experience is conveyed through the precise delineation of form, the handling of paint, and the dramatic depiction of the animal itself, with upswept horns and unwavering gaze.

One of the most masterful depictions of Dzunukwa, or Wild Woman of the Woods, an 1870 mask from British Columbia. Dzunukwa was a creature believed to carry off wandering or misbehaving children. Stories of her presence were intended to keep children close to home. This dramatic work conveys the convincing impression of a half-animal, half-human creature of the forest. The mask is one of several important pieces from the Estelle and Morton Sosland Collection.

A rare Pawnee split horn headdress, ca. 1840. The work, donated to the Museum in 2007, is one of the few Pawnee objects preserved from the historic period. It would have transformed the warrior who wore it into a horned figure, reflecting an ancient Woodland pictorial tradition whereby the addition of horns signified supernatural power. Worn by a man of rank and military achievement, it was believed to endow the owner with sacred power and protection in battle.

A contemporary basketry hat by Haida artists Primrose Adams and Robert Davidson. This collaborative work continues the long Northwest Coast tradition of woven and painted basketry rain hats. Both makers, the weaver and the painter, are recognized as contemporary masters of their respective arts. The painted image represents a shark, one of the important clan emblems of the Haida people. Its highly stylized, precisely painted figure is adjusted perfectly to fit the hat’s finely woven, conical form.

American Indian Art at the Nelson-Atkins
The Nelson-Atkins has exhibited American Indian art since its inception in 1933, a time when few art museums were featuring this material. The new galleries underscore the Museum’s long-term commitment with the display of its early acquisitions from the George Gustav Heye collection in New York and the Fred Harvey Company, in addition to important gifts throughout the Museum’s ensuing 75-year history.

Torrence built on the rich foundations of these early acquisitions and has led the Department in a significant expansion, bringing in new works from private collections, dealers and Native artists to join the Museum’s already distinguished collection.

Each of the new galleries bears the name of principal supporters of this effort: John and Marilyn McConnell, John A. and Patricia Morgan, and Fred and Virginia Merrill.

Previously the American Indian galleries were located within about 1,500 square feet on the third floor of the Nelson-Atkins. The new galleries are located in space previously occupied by the Modern & Contemporary galleries, which were moved to the Bloch Building when the expansion opened in 2007.

With these new galleries, the Nelson-Atkins assumes a leadership role in the promotion and display of American Indian objects as works of fine art, extending the tradition of the institution’s landmark 1977 exhibition, Sacred Circles.