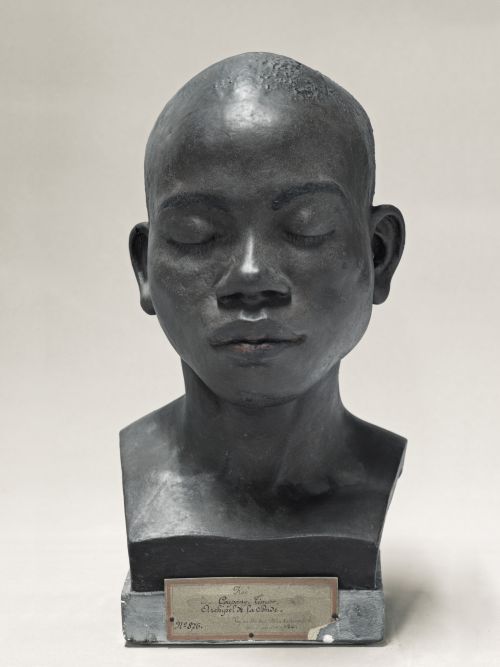 Fiona Pardington’s The pressure of sunlight falling is a powerful series of large-scale photographs that feature life-casts including those of indigenous peoples of the South Pacific taken during one of French explorer Dumont d’Urville’s nineteenth-century voyages.

Each measuring about 1.7m x 1.4m framed, these 21 photographs depict casts of human heads made by the medical scientist and phrenologist Pierre-Marie Alexandre Dumoutier. The selection presented at the Govett-Brewster Art Gallery traces the path of their voyage between 1837 and 1840.

The majority of the casts photographed are in the collection of the Musée de l’Homme in Paris, one of the museums that form the Musée National d’Histoire Naturelle.

The people who agreed to the arduous process of having a cast made included Māori chiefs, men and women from communities throughout the Pacific and Dumoutier and d’Urville themselves.

Govett-Brewster director and exhibition curator Rhana Devenport says Pardington examines the ways in which the photography of objects and the proto-photographic medium of casting can register empathy and the presence of former lives.

“The exhibition of photographs explores the meanings, histories and functions of nineteenth-century life casts while examining the unique, emotive power of photographic portraiture,” Ms Devenport says.

A photographer of international reputation, Pardington has exhibited widely in Australasia and in France at the Musée du Quai Branly. A selection from this series was included in the 2010 Biennale of Sydney under the title Ahua: A Beautiful Hesitation.

Fiona Pardington: The pressure of sunlight falling is presented June 11 to August 28, 2011. The Govett-Brewster Art Gallery will then tour the exhibition to the Dunedin Public Art Gallery in September.