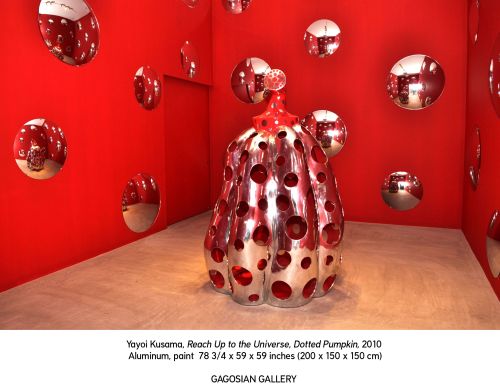 Gagosian Gallery is pleased to present an exhibition of recent paintings and sculptures by Yayoi Kusama.

Kusama is a living legend of the international avant-garde who has emphatically eschewed the categorizations of modern art. Flamboyant yet profound, her oeuvre runs the gamut from unique masterpieces to mass-produced pop culture commodities, consistent in their constant and manifold appeal to the imagination and the senses. In a protean career spanning more than sixty years, she has made cosmic infinity and personal obsession the twin poles of her artistic inquiry. This exhibition of recent work weaves between the two oppositions, juxtaposing monadic sculptures with topological installations and abstract paintings with self-portraits.

Three sculptures spanning fifty years reveal Kusama’s constantly evolving approach to reflectivity as concept, process, and metaphor. Narcissus Garden is a sculptural installation of hundreds of mirrored balls, distributed in an aleatory manner across the gallery floor, reflecting everything around them. It earned Kusama notoriety when she first presented it at the 33rd Venice Biennale in 1966 as a rogue event on the lawns of the Italian Pavilion. Dressed in a traditional Japanese kimono, she offered the mirrored balls for sale for 1200 lire apiece, drawing attention to the commercial realities of art ignored in the context of the international festival. Many years after this incident, Kusama produced Narcissus Garden in ten versions of varying scale. Passing Winter (2005), a seemingly Minimalist cubic sculpture fashioned from highly polished industrial mirror glass, reveals trippy optical complexities as viewers peer into its depths via circular spyholes cut into all fours sides of its gleaming surface to find themselves reflected within, infinitely multiplied. Reach Up to the Universe, Dotted Pumpkin (2010) is another mirror, this time in the shape of Kusama’s favorite pumpkin motif, which she has described as a sort of alter-ego. A hollow form cast in aluminum, highly polished, and perforated with holes to reveal a bright vermilion interior, Reach Up… is installed in a matched monochrome environment dotted with convex mirrors of varying sizes, so that sculpture and environment endlessly reflect and multiply each other and the viewers moving between them.

Similarly, Kusama’s dynamic Dots Obsession painting series is an ongoing meditation on infinity and the void. Flatly painted monochrome fields are dotted with perfect rounds of varying size to suggest black holes of illusory deep space punched into the picture plane. In two vivid and large-scale Self-portraits, Kusama’s own image, stylized, flat and frontal like a Russian icon, is articulated in swathes of her signature repeat patterns, minutely worked in pulsating color.