Socialist Realism: Inventory of an Archive

Socialist Realism: Inventory of an Archive
State Museum of Modern Art of the Russian Academy of Arts at 10 Gogolevsky Boulevard
December 17, 2009 – January 17, 2010 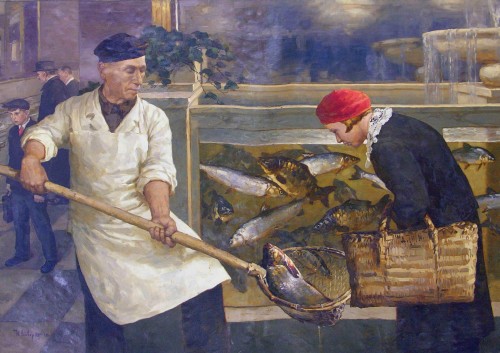 “Socialist Realism: Inventory of an Archive” marks the 50th anniversary of the State Museum and Exhibition Center ROSIZO and the 10th anniversary of the Moscow Museum of Modern Art. For the first time, this project presents a unique collection of Soviet art of the 1930s-1940s from the keepings of ROSIZO.
The history of this collection dates back to 1937-1939, when a large-scale exhibition entitled “Industry of Socialism” was in preparation. A great stratum of paintings, sculptures and graphic pieces created for the exhibition that was never realized, settles down in the holdings of the Direction of Special Exhibitions and Panoramas, founded in 1940. In 1951, the Special Archive of Artworks is created within the Zagorsk Museum and Reserve, and about 1.500 pieces from the Direction are transported there. In 1958, this Archive is transformed into the Special Centralized Depository of Artworks, and the next portion of works enriches it, including portraits of late or fallen-from-grace Soviet leaders – Stalin, first of all.
The unique collection of the Special Archive demonstrates how ideology-driven was the authorities’ approach to art and creative production, even during the Thaw. At first glance, it is hard to understand what was so riotous about B. Tsvetkov’s “Hydro-Aviation” (1933) or “Float Delivery” (1937) that praised the Soviet utopia of “higher, and higher, and higher”. However, the Special Archive, which kept supplying many museums in the country during the Khrushchev Thaw and Brezhnev stagnation, was tight with these works of “dubious background”, that is to say patronage of Stalin’s regime. By the way, sometimes it appears that canvases like “Frontier Guards in Batumi” (1932) by V. Lyushin or “Tank Attack“ (1933) by E. Zernova, created for the exhibition devoted to the 15th anniversary of the Red Army, could seem too unusual and avant-garde to artistic councils of the 70s. These and many other circumstances led to keeping many works in the archive that was handed over to ROSIZO in the early 1990s; this collection displays the peculiarity of “Soviet idealism” of first Stalinist decades and the troubles of “struggling for the banner”, as art critic Ekaterina Degot put it.
It is no wonder that art of this transition period (1920s-1930s) still attracts the attention of curators and spectators. It is proved by several successful exhibitions carried out recently in Europe and Russia, such as “Communism: Factory of Dream” (2003, Frankfurt), “Soviet Idealism” (2005, Liege), “Red Army Studio” and “Struggling for the Banner” (2008, Moscow). Works from ROSIZO holdings took part in all these exhibitions. On the one hand, it is a perfect starting point for a discourse, on the other – an extremely interesting creative phenomenon that shows many cases when painterly skills force their way through tight limits of ideology and appear in original aesthetic treatment.
Of course, works from ROSIZO archives are of uneven artistic quality. However, in this display the pieces “blurt” much about the life they portray – that it is not a “radiant way” but rather a hard existence without light, joy, or hope. These canvases depict workers’ meetings and discussions, labor at a plant or a carpet factory, or a foundry, a grocery store, or a culinary department.
The most controversial pieces – in the context of today’s perception – are those that enriched the archive
in the 1950s, after the cult of Stalin was dismissed. For many years, the tower in Zagorsk became a place to hold dismantled monumental portraits of the leader, executed by main official painters of the time – A. Gerasimov, V. Svarog, and B. Efanov. All these paintings praised the personality of Stalin and created a new mythical history of the country, as well as the legend of higher authority embodied in one man. The mythological representations of power, created by socialist realism, borrowed from the universal artistic experience but exaggerated it. Apart from portraits of the Leader of Nations, they are visible in paintings depicting Stalin’s military companions, such as V. Molotov, K. Voroshilov and others. It should be noted that the methods of extreme psychological impact on the potential audience were very effective, for artists didn’t hesitate to employ unexpected and risky tricks that flattered the authorities.
Today these canvases are restored and set on stretchers; they have entered the art-historical life and are often demonstrated at exhibitions that show no nostalgia for the regime gone, but aim at the analysis of the complex creative situation of those years and methods of representation produced by the official art. That is why the broad span of pieces chosen for the project “Socialist Realism: Inventory of an Archive” includes the transition aesthetics of “Soviet idealism”, the mass introduction of strictly controlled official methods, and the formulas that were fully developed by the masters of Socialist realism.

Philagrafika 2010 The art of Russian Masters