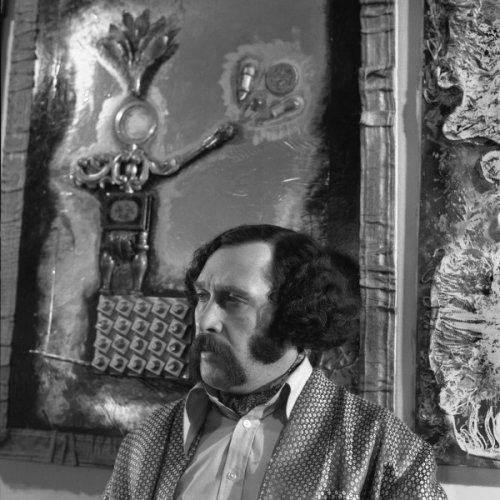 [ad#lb]
The large-scale project entitled “Anatoly Brusilovsky. Pantheon of the Russian Underground” marks 10 years of existence of the Moscow Museum of Modern Art. This exhibition is based on works by artists of the 60s, coming from the holdings of the Museum, as well as private collections. They form an impressive setting for the unique gallery of photographic portraits of those very artists, created by Anatoly Brusilovsky and recently acquired by the Moscow Museum of Modern Art.
Anatoly Brusilovsky is master of book illustration, graphic arts and jewelry, author of numerous assemblages, collages, photos and paintings. Along with artistic production, he documented in detail the artistic process that he witnessed. His interesting memoirs “Studio” that describe life and work of his colleagues and soul mates can serve an example. In the original chronicle of the flourishing time of underground art in totalitarian Russia, Anatoly Brusilovsky tried to reflect the unbreakable bond between the notions of an artist and a human being.
An experience of creating galleries of portraits of famous contemporaries is
a rather frequent one. However, Brusilovsky’s project is unique, for it was carried out by a man coming from the same background, “one of them”. Artists are depicted not as aged and famous masters but at the stage of formation – not too young but full of energy and creative ideas. They are captured at the moment of their fullest span, at the moment of “great expectations”.
Besides, there is another important aspect: just a few years after the appearance of these photographs, many participants of the project left the Soviet Union forever. The artist and his camera grasped their heroes on the eve of a crucial step – to go or to stay.
The whole material was shot during several months – in one breath, literally. At the same time, each portrait was carefully prepared with compositional sketches, selection of accessories and scenery, light setting. As Brusilovsky puts it, it took him one whole day to accomplish a portrait. Before shooting, he “had long conversations with the sitter, trying to find the right mood and feeling, searching for the expression of the eyes, for a characteristic pose or gesture”. Brusilovsky knew all these people well and long; he thought they were perfect models for his large-scale concept. His heroes presented “a broad scale of human characters, psychological types, and expressive faces – very different and very typical, too”. They were faces of their time.

In the Eye of Modernity Interferences, Art and the Hospital