So Bravely and So Well: The Life and Art of William T. Trego
Michener Art Museum
June 4 – October 2, 2011 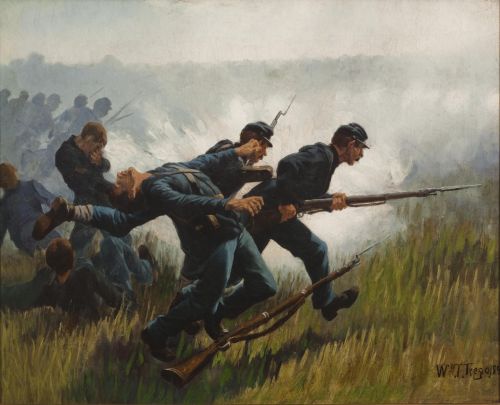 He was a painter who could barely hold a brush. He had to move his entire body to mix his colors. Yet William T. Trego (1858-1909) was a prize-winning artist with an international reputation, and his highly detailed and powerful battle scenes from the American Civil War and the Franco-Prussian War were widely exhibited and critically acclaimed during the late 19th century.

Partially paralyzed as a child (most likely due to polio), Trego never experienced the horrors of war, but his uncanny ability to portray battle from the point of view of fighting men and horses was much admired.

So Bravely and So Well: The Life and Art of William T. Trego is on view June 4 through October 2 at the James A. Michener Art Museum in the PatonISmithIDella Penna-Fernberger Galleries. This exhibit is sponsored by Sharon & Syd Martin, with additional support from Marguerite Lenfest in memory of Leonie Herpin; the Pfundt Foundation; and Penn Color, Inc.

Trained by his father (artist Jonathan K. Trego), William Trego went on to study at the Pennsylvania Academy of the Fine Arts and the Académie Julian in Paris. Two of his works were accepted in the annual Paris Salon exhibits. His decision to devote himself to military history painting was made early on, a choice possibly influenced by the American Civil War, which raged during the years of his childhood. Despite his severe physical challenges, Trego created his dramatic battle scenes with meticulous care, staging re-creations of battle scenes outdoors with models wearing authentic uniforms drawn from his private collection. Only after making countless charcoal sketches and working up individual men and horses in detailed oil studies did he begin applying paint to his final canvas.

Professor Eckhardt has been researching the life and work of William T. Trego since 2007 and was instrumental in arranging for the State of Pennsylvania to install a State Historical Marker at Trego’s former home in North Wales, Montgomery County, Pennsylvania, in 2008. In support of his research and his assistance in the preparation of the William T. Trego biography, exhibit, and online catalogue raisonné, the James A. Michener Art Museum awarded Professor Eckhardt the Helen Hartman Gemmill Research Fellowship for the years 2010 and 2011.

Eckhardt’s previous publications include a biography of film pioneer Siegmund Lubin (The King of the Movies, Fairleigh Dickinson University Press, 1997), and numerous articles on the early film industry published both in the U.S. and Europe. He founded and maintains the Betzwood Film Archive and Film Festival at Montgomery County Community College.