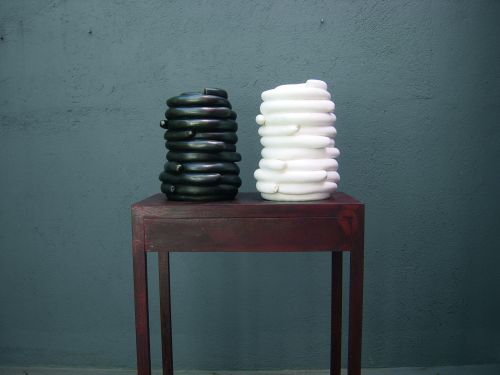 Malmö Konsthall is pleased to present the first major European retrospective of Brazilian artist Anna Maria Maiolino (b. 1942). Maiolino’s complex works have developed through a variety of media: poetry, woodcuts, photography, film, performance, sculpture, installation and, above all, drawing. The wide spectrum of subjects, interests and attitudes that underlies her work does not follow a linear development, either in the work itself or in time. Rather, through the diversity of her work, she creates a web where themes and attitudes intertwine while meanings slip between one work and another.

In this way, the subject of her first woodcuts and reliefs from the mid-1960s, which relate language to food and allude to scatology, reappear in two actions from 1978 (Monumento à Fome (Monument to Hunger) and Estado Escatológico (Scatological State)), which exemplify Maiolino’s embracement of the theme of the body: to connect what comes in and out of it. This subject reappears in the 1990s, firstly in the sculptures that evoke food on a platter or scatological forms, and later in the installations where the artist accumulates basic clay forms that resemble pre-industrial accumulations or excrement. These installations of rudimentary, equal and different forms, directly moulded from primordial and repetitive hand gestures, evoke the pulse of life in everyday objects and insignificant gestures. Made of unfired clay, these big installations are ephemeral, as the clay, once dry, slowly turns to dust. The sculptures and installations from this period appeal to our tactile senses rather than the visual. Anna Maria Maiolino will make a site-specific clay installation for Malmö Konsthall’s project space, C-salen.

The correspondence of Maiolino’s work with excrement is directly related to the construction of subjectivity. The subject is formed by language but also by the abject, by what has been expelled from the body and transformed into an alien element. And therefore, the abject establishes not only the limits of the body that are socially regulated and controlled, but also the limits of the subject.

For Maiolino, subjectivity is relational and her work moves between dichotomies — in-out, positive-negative, absence-presence — that are constantly reconnecting in a process of transformation. In her drawings from the 1970s, which she defines as works ‘with’ paper, not ‘on’ paper, Maiolino is interested in the space that is not visible, in what lies behind. To that end, she cuts, tears, rips and then stitches or superimposes the different papers, incorporating the back of the work, in an attempt to unite dichotomies and explore the corporality of the material. The artist uses paper as space and body. These works reveal an intimate negotiation of space, and the holes seem to allude to the interior space we imagine within ourselves

In Maiolino’s work, there are also numerous allusions to the political situation in Brazil during the years of the dictatorship. Her film In-Out (Antropofagia) (In-Out (Anthropophagy)), 1973, unites language and body through saliva, while talking about censorship and the lack of freedom during those years. This subject is present in many of the artist’s works, such as the performances Entrevidas (Between Lives), 1981. Here, the artist walks slowly on a floor full of eggs that evoke the biological mandate of reproduction, while the path taken by the artist suggests a caring for life and its potentiality. This performance was realised at a time when Brazil was beginning to open up to democracy.