Paintings from the Reign of Victoria: The Royal Holloway Collection, London

The Delaware Art Museum presents Paintings from the Reign of Victoria: The Royal Holloway Collection, London, an exhibition of 60 of the most important paintings from the Victorian period, encompassing the full range of subject matter and style, on view February 1, 2009 – April 12, 2009. 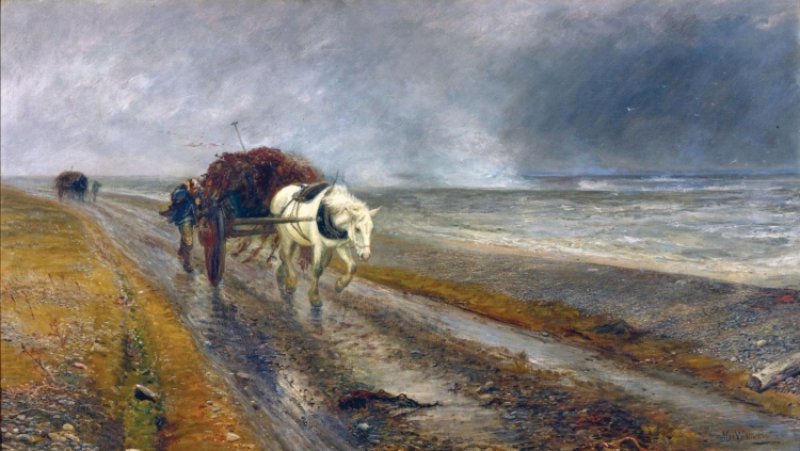 [ad#lb]
The Delaware Art Museum presents Paintings from the Reign of Victoria: The Royal Holloway Collection, London, an exhibition of 60 of the most important paintings from the Victorian period, encompassing the full range of subject matter and style, on view February 1, 2009 – April 12, 2009. The paintings were acquired by Thomas Holloway and installed in the women’s college he founded in 1879, which is still in operation today as Royal Holloway, University of London. Equating beauty with morality, Holloway believed art could be a teaching tool. He bought only the best paintings, with an established provenance, and paid the highest prices at auction.

The collection includes scenes of contemporary life, historical events, landscapes, animal studies, and marine subjects. Artists represented include, among others, Sir Edwin Landseer, William Powell Frith, and Pre-Raphaelite painter Sir John Everett Millais. Until now, the majority of the 60 canvases had never been exhibited outside of England.

“Thomas Holloway’s collection, assembled over three intensive years of buying only the finest examples of Victorian art, forms a unique, ‘time-capsule’ view of this crucial moment in British history,” said Margaretta Frederick, curator at the Delaware Art Museum. “The broad range of subjects reinforces the notion that ‘the sun never set on the British Empire’ during this period.”

Samuel Bancroft, Jr. (1840-1915), a Wilmington textile mill owner, was “shocked with delight” upon viewing his first Pre-Raphaelite painting in 1880, and he began assembling his collection with the purchase of Dante Gabriel Rossetti’s Water Willow in 1890. Bancroft’s family bequeathed his Pre-Raphaelite holdings to the Delaware Art Museum in 1935. The Bancroft Collection is particularly strong in the late works of Dante Gabriel Rossetti, which depict beautiful, seductive women, often called “stunners,” as well as works representative of the Arts & Crafts Movement.

Press Preview
Members of the press are invited to preview Paintings from the Reign of Victoria: The Royal Holloway Collection, London on Thursday, January 29, from 10:00 a.m. to 11:00 a.m. at the Delaware Art Museum. Curator Margaretta Frederick will lead a tour and answer questions. Please RSVP to Dennis Lawson, Manager of Public Relations, by Monday, January 26.

· Popular Paintings, Celebrity Artists: Back to the Future with the Victorians (lecture)
Saturday, February 21 | 1:00 p.m. – 2:00 p.m. | Free with Museum admission
Headline-grabbing auction prices and art stars are not distinct features of today’s art world. Publicity and celebrity began to colonize the art market in the Victorian period, when Thomas Holloway created the collection now featured in Paintings from the Reign of Victoria. This lecture by Laurel Bradley, Director of Exhibitions at Carleton College, MN, will introduce artists from Edwin Landseer to John Everett Millais, exploring how the evolving culture of celebrity impacted careers and reputations. In addition, this presentation will follow the fortunes of key artworks as values rose and fell with changing tastes and market conditions.

· Unlacing the Victorian Woman
Friday, March 6 | 6:30 p.m. | Free
Participants will delight in this educational and entertaining program! Presented by Barbara Meyer Darlin, who combines her skills as a designer, seamstress, historian, and performer, “Unlacing the Victorian Woman” enchants audiences by revealing a day in the life of a fashionable turn-of-the-20th-century society woman—with on-stage costume changes, right down to her chemise. (Audience members can volunteer to help with costume changes.) Daily routines, social customs, and etiquette are also discussed.

· An Afternoon with Jane Austen
Saturday, March 14 | 2:00 p.m. | $12 Museum Members / $20 Non-Members
Perfect for Women’s History Month, this program features songs about which Jane Austen wrote in her notebook along with readings from her novels. Performers include Julianne Baird (soprano), Karen Flint (harpsichord), and Edward Mauger (narrator).

Organizer
Paintings from the Reign of Victoria: The Royal Holloway Collection, London is organized and circulated by Art Services International, Alexandria, Virginia.

Sponsors
The national tour has been supported by The Chisholm Foundation, and the catalogue sponsor is Hiscox.
This exhibition is presented in Delaware by DuPont and Royal Holloway, University of London.
Additional support is provided by the Emily du Pont Memorial Exhibition Fund and the Hallie Tybout Exhibition Fund.
In Delaware, this exhibition is made possible, in part, by grants from the Delaware Division of the Arts, a state agency dedicated to nurturing and supporting the arts in Delaware, in partnership with the National Endowment for the Arts.