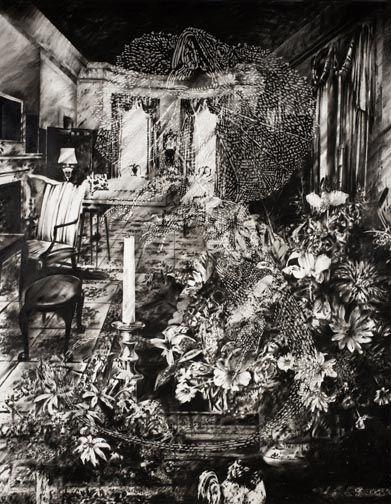 [ad#lb]
The Denver Art Museum is delighted to present an exhibition of contemporary drawings acquired over the last two years through the generosity of the Eleanor and Henry Hitchcock Foundation. This collaboration supports the Modern and Contemporary Department’s initiative to develop and enhance a drawing collection that surveys the wide-ranging techniques of a diverse group of artists. This first selection provides an opportunity to study new explorations in this traditional medium by artists including Peter Saul, Alexander Ross, James Drake, Rebecca Horn, Barry Le Va, Joe Zucker and Steve DiBenedetto.

With an appetite for creating large black and white drawings that enhance the drama of a situation, James Drake probes various social, political, and universal themes. A Lizard with Some Flowers, of a series of drawings depicting opulent rooms with overlays of reptiles, has a ghostly quality that weirdly connects the planet’s early creatures with life as it has evolved. The Lizard is created by erasing bits of the room.

In 1968, Barry Le Va made a splash when, less than two years out of art school, he landed the cover of Artforum. Primarily known for his sculptural work, Le Va often makes drawings that resemble architectural or technical diagrams, such as his Sculptured Activities, inviting the viewer to move through the work and to notice a certain rhythm and conversation among the shapes.

Octopi and helicopters are recurring images in Steve DiBenedetto’s beautiful yet disturbing worlds. Elements sometimes appear to be locked in deadly struggles.
Rich gemlike tones are frequently layered in his work to create luminous colors and textured surfaces. In contrast, his work Reorientation II demonstrates how lack of color can heighten the drama. Though sometimes characterized as representations of the psychedelic, DiBenedetto’s works are concerned with ideas
of change, destruction, and human consciousness.

Drawings, Anyone? Recent Acquisitions from the Eleanor and Henry Hitchcock Foundation is on view in the works-on-paper gallery on the third level of the Denver Art Museum’s Hamilton Building through fall 2009. The
exhibition is included in general museum admission.