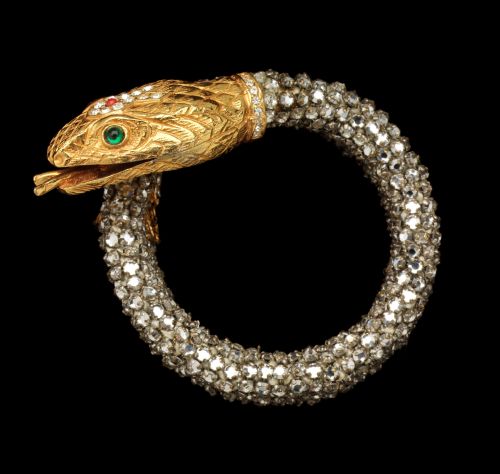 Catch a rare glimpse of the work of Kenneth Jay Lane, the major American maker and designer of costume jewelry who continues to lead the industry. Lane, a stalwart of the fashion world, is widely credited with making costume jewelry as glamorous as million-dollar baubles. Hundreds of his creations – the likes of which have been worn by Jacqueline Kennedy Onassis, Nancy Reagan, Diana Vreeland, Britney Spears and countless other women from every walk of life – are featured.

Mr. Lane commented, “I am particularly pleased that my retrospective exhibition will be at the Norton Museum. Palm Beach is one of the last bastions of glamour and where many of my friends and clientele live. When I began almost 50 years ago I never imagined that my work would become vintage and collectible.”
A compelling figure and master of the bon mot, Lane is not only a long-established presence in society circles but a charming and wildly popular showman on QVC. He has outfitted First Ladies and Hollywood royalty in his fakes, and his early pieces now fetch hundreds of thousands at auction. Lane’s 1996 memoir, Faking It, is considered an industry bible.
After earning a BA in Advertising Design from the Rhode Island School of Desgin in 1954, Lane briefly worked in the Vogue art department before embarking on a career as a shoe designer for Christian Dior and Arnold Scaasi. In the early 1960s, he created several costume jewelry pieces to match his bejeweled shoes, and a legend was born. The first designer to make beautiful and witty jewelry affordable to the masses, Lane considers himself a fine jeweler who works in plastic, rhinestones, and other inexpensive materials. “I believe every woman has the right to be glamorous,” he has said. “Style has little to do with money.”

The exhibition, Fabulous Fakes: Jewelry by Kenneth Jay Lane, was organized by Henry Joyce, an independent curator of decorative arts and design, in conjunction with Kenneth Jay Lane who loaned objects, advertisements, photographs, and research to the exhibition. Joyce, formerly was Curator at Shelburne Museum of Art, Vermont and organized several exhibitions and historic building reinstallations.