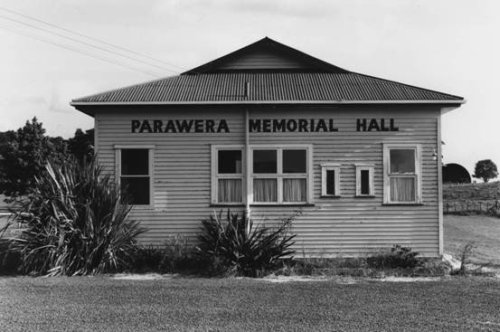 War Memorial Halls occupy an iconic place in the cultural and geographic landscape of Aotearoa New Zealand. Auckland artist Fiona Jack’s work looks at the significance and history of these buildings to our communities and national identity, as well as their function and status in today’s society.

Following the Second World War, the New Zealand Government offered subsidies for war memorials to be constructed throughout the country, with a strong preference indicated for the formation of new community spaces as ‘living memorials’ for those who sacrificed their lives fighting overseas. Jack’s Living Halls project, which spans almost two years (and counting) engages with this phenomenon.

Living Halls comprises accumulations of paintings, drawings, and photographs. The paintings are generous contributions from artists throughout the country and form a rich visual archive, reflecting close relationships between these buildings and their communities.

Govett-Brewster Director Rhana Devenport, who is curating the exhibition says: “Jack’s three months in Taranaki during the summer of 2009/10 as part of our Residency programme allowed the project to open out and become entwined with hundreds of souls across Aotearoa, whose involvement with the story of War Memorial Halls in New Zealand was particular, personal and until then, somewhat invisible. The archival and research nature of the project has unearthed innumerable architectural plans, drawings, histories, memories and stories.”

A book about the project, co-produced by the Govett-Brewster and art publisher Clouds is due out later in the year.

Fiona Jack is the 2009/10 Govett-Brewster New Zealand Artist in Residence, a major partnership with Western Institute of Technology at Taranaki (WITT) supported by Creative New Zealand.