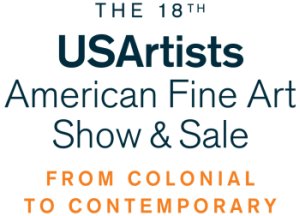 The 18th USArtists American Fine Art Show & Sale
October 1 – 3, 2010
Presented by the Women’s Board of the Pennsylvania Academy of the Fine Arts (PAFA), the 18th USArtists American Fine Art Show & Sale, the largest exposition and sale of 18th- through 21st-Century American art in the nation, will be presented October 1 – 3, 2010 at PAFA. For the first time in its 18-year history, USArtists will be moving from its longtime venue at the 33rd Street Armory to its home at PAFA’s Samuel M.V. Hamilton Building at 128 North Broad Street in Philadelphia.

In celebration of American artistic talent, USArtists reflects the vitality, history and uniqueness of American art. This annual three-day event to benefit PAFA showcases 300 years of the nation’s finest original works — from colonial to contemporary — in an event that includes 35 of the country’s leading art galleries and dealers, and draws thousands of visitors each year.

“The addition of the Samuel M.V. Hamilton Building to PAFA’s campus gives us the opportunity for the first time to host USArtists within the museum,” said David R. Brigham, PAFA’s President and Chief Executive Officer. “Doing so creates stronger linkages to our educational mission and opportunities to develop new programs related to the challenges and thrills of collecting art.”

USArtists Co-chair and President-elect of the Women’s Board, Alicia Sterling stated, “This is a very exciting year for USArtists, as we bring this benefit event home to PAFA. As an event entirely devoted to American art, held in a museum setting, we offer the only show and sale of this kind with high quality work that spans the history of American art.”

This nationally recognized show of over 5,000 works of art will include an opening Preview Gala, followed by a New Collectors Night, and group tours with proceeds to directly support PAFA student scholarships.

USArtists provides regional and national art collectors and audiences the opportunity to view and purchase thousands of pieces of artwork presented by some of the country’s most prestigious galleries from Pennsylvania, New York, Connecticut, Michigan, Massachusetts, and Maine, among others. To highlight the artists, exhibitors, and events, the Women’s Board will soon launch the updated www.usartists.org website.

Founded in 1992 by the Women’s Board to benefit the museum and school as its major annual fundraising event, USArtists speaks to the purpose and mission of the Academy — to nurture American art and artists. The success of the USArtists show and sale hosted by the Women’s Board allows them to continue their legacy of providing support for student scholarships. In the 60-year history of the Women’s Board its members and events have contributed more than 10 million dollars to PAFA.

The Preview Gala will open USArtists on Thursday, September 30 from 5 p.m. – 9 p.m. The Gala attracts the most serious collectors, as it offers the first opportunity to view and purchase from the dealers’ diverse collections. New Collectors Night, on Friday, October 1 from 5:30 p.m. – 8 p.m., is an event for individuals who may be relatively new to collecting and includes a cocktail party and informal lectures on art and how to establish and maintain an art collection. During the run of the show, Dealer Talks will offer visitors a chance to learn from the experts during short lectures in selected dealers’ booths. USArtists also offers its Special Needs program, the first such program at any national arts fair, which provides touch tours for the visually impaired, ASL translators for the hearing impaired, as well as free workshops and docent-led tours of the show to visitors who are physically challenged.