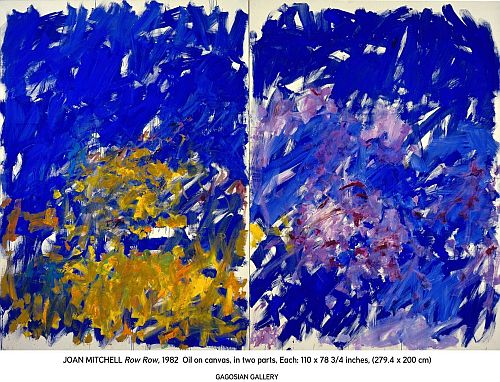 Born just one year apart in the Midwestern United States, Mitchell and Chamberlain were inspired by the muscular spontaneity of Abstract Expressionists such as Franz Kline and Willem De Kooning. Mitchell is considered a principal figure in the second generation of Abstract Expressionists as well as one of the few female exponents. Her lively and impassioned paintings laud the beauty of the natural world. Chamberlain is best known for his metal sculptures constructed from discarded automobile-body parts and other modern metal detritus, where the industrial origin of materials is underscored by a cumulative formal elegance. 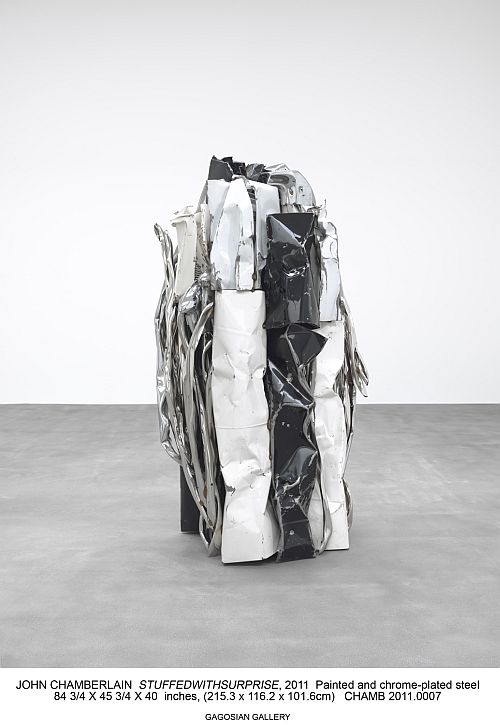 Mitchell worked for the most part on large-scale canvases and multiple panels, striving to evince a natural rhythm that emanated from the expansiveness of gesture and from uninhibited use of color; Chamberlain’s emphasis on discovered or improvised correlations between material and color rather than a prescribed idea of composition have often prompted descriptions of his work as three-dimensional Abstract Expressionist paintings. The painter and the sculptor share a preference for excess and spontaneity in their art-making. The energetic clustered brushwork of Mitchell’s Yves (1991), Untitled (1987 – 1988) and Row Row (1982) perfectly complements Chamberlain’s crumpled, crushed, bent, and welded ACEDIDDLEY (2008) GOOSECAKEWALK (2009) and STUFFEDWITHSURPRISE (2011), in which sweeping, sterling contours suggest an aggregate of brushstrokes.