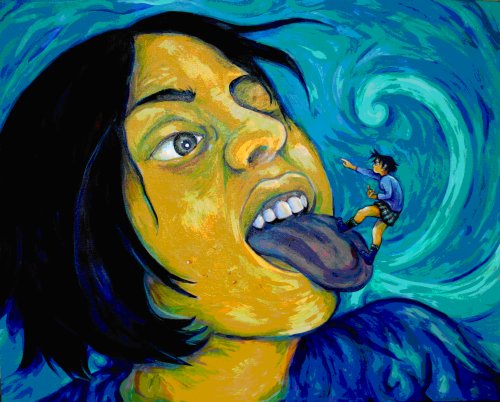 While the history of women in comics is well-documented, and the Jewish contribution to the art form widely acknowledged, Graphic Details: Confessional Comics by Jewish Women will be the first museum exhibit to showcase the singular voices of female Jewish artists whose revealing diaristic and confessional work has influenced the world of comics over the last four decades.

Some bare their bodies. Some expose their psyches. All are fearless about sex, romance, politics, body functions, experiences, emotions, and desires.

Many of the original artworks on display have never been exhibited in public until this show. Artists run the gamut from pioneering Wimmen’s Comix and Twisted Sisters artists of the 1970s and 1980s to superstar younger artists:

The Forward, the leading independent Jewish weekly newspaper and web site, is media sponsor, and will publish the show’s catalog as an eight-page newspaper broadsheet. The catalog will include the last story written by Harvey Pekar, the legendary writer and pioneer in autobiographical comics. Pekar had been collaborating with artist Tara Seibel on the essay for Graphic Details at the time of his death.

On October 21, the Cartoon Art Museum will host a panel on autobiography in comics featuring several of the featured artists, experts, and the curators. Graphic Details is co-curated by Michael Kaminer, a New York journalist and collector whose December 2008 story on confessional comics in the Forward provided the impetus for the show. His co-curator, Sarah Lightman, is an award-winning fine artist, curator and arts journalist based in London who is researching a PhD at The University of Glasgow in Autobiography in Comics.

“We’re very pleased to be the first venue for this exhibition,” said Cartoon Art Museum Curator Andrew Farago. “We were interested in collaborating with Michael and Sarah based on their initial description of the exhibition, and knew that we had to get on board once they gave us a list of all of the artists who were involved.”

>From the Forward story: “While women have been writing frank confessional cartoons since the early 1970s, the context has changed. Brutal sexism defined underground comics back then, with females mostly depicted as fawning objects for a largely male readership. Blunt confessional comics were a throat-grab from women who dared male readers to confront real, unvarnished female characters.

“Today’s autobiographical comics come as less of a cultural jolt. For one thing, women have become a formidable presence in comics. Personal problems have also supplanted gender politics as a dominant theme. But these young artists are just as ruthlessly honest, presenting their bodies as nakedly as their emotions. They’re also finding a new crop of audiences, weaned on blogs and tell-all Facebook pages, even hungrier for first-person intimacy.”

The show will run until January 2011 in San Francisco, when it moves to Toronto’s Koffler Centre for the Arts, one of Canada’s leading cultural institutions.