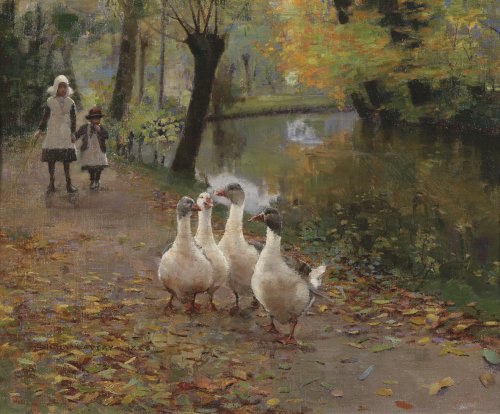 The Fine Art Society has long been associated with the Glasgow Boys and it is fitting that it should mount an exhibition to celebrate the staging of the largest ever survey of this groundbreaking group of artists. This touring exhibition which begins at Bourne Fine Art, Edinburgh (8 April – 1 May 2010) is timed to coincide with Pioneering Painters: The Glasgow Boys 1880-1900 held at Kelvingrove Art Gallery & Museum that runs from April to September before transferring to the Royal Academy of Arts, London in October.

The Glasgow Boys, whose most inspired period of activity lasted from 1885-1900, had considerable international success during that period and were amongst the most avantgarde of British artists. Their success in international exhibitions from Munich to Chicago came at a time when few British artists were appreciated abroad. Although only some of them were born in Glasgow – Hornel was born in Australia, Melville in Edinburgh and Lavery, the most internationally successful, in Belfast. Perhaps a catalyst for calling themselves The Glasgow Boys was their initial rejection by Edinburgh’s Royal Scottish Academy.

In the beginning these artists were no more exceptional than their British peers. They went through the same training at art school, followed by the cramped and noisy ateliers in Paris where they studied naked models alongside French, English, Irish, American, Eastern European and Scandinavian students. This rigorous training and competitive atmosphere fuelled by heady debates positively influenced the group and when they returned to Glasgow towards the end of 1884 they were determined to change things. ‘Art’ as one of the Glasgow students triumphantly recalled ‘was the only thing worth living for’.

Travel too was important to the Glasgow Boys and as well as following their works to international exhibitions, they were adventurers. Henry and Hornel travelled to Japan; Mann, Crawhall and Lavery established an outpost in Tangiers and Melville trekked to Baghdad.
Everywhere but London and Edinburgh, this group of artists became international stars celebrated for their bright colour and new surface patterns.

Sir John Lavery (1856-1941), who was sent to Scotland as a small boy following the death of his parents attended the Haldane Academy in Glasgow, Scotland in the 1870s and the Académie Julian in Paris in the early 1880s. He returned to Glasgow and was part of an impressive circle. He was a friend of Whistler and Rodin, was fêted at the Venice Biennale and became a Royal Academician and an Official War Artist. He painted some of his best work in France during the 1880s in Paris and in the rural artists’ colony, Grez-sur-Loing. He taught Churchill to paint and through him, and his own socialite wife, met and painted the
Royal Family and many of the leading politicians of the day.

The Fine Art Society’s touring exhibition devoted to Lavery and the Glasgow Boys, opens at Bourne Fine Art in April and travels to Ava Gallery, Clandeboye, Belfast in May before moving to the Fine Art Society, London for its third and final showing in October 2010. Amongst the paintings included in the exhibition is The Shepherd by E. A .Walton (1860-1922), a large and arresting canvas depicting a young man and his dog staring directly out of the canvas at the viewer. This picture has been in a private American collection since its purchase in Pittsburgh in 1898. Tuberous Begonia by James Paterson (1854-1932) is a wonderfully bold and simple painting where the pale pink of the flower punctuates and illuminates the entire canvas. The impressionistic Tangier from the Dunes was painted in the last year of Alexander Mann’s (1853-1908) two-year stay in that city.