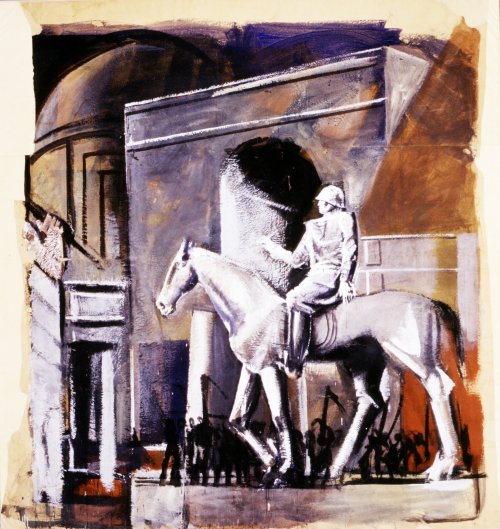 Rising from the ruins and horror of World War I, European art and culture returned to the classical past, seeking tranquility, order, and enduring values. Artists turned away from prewar experimentalism and embraced the heroic human figure and rational organization. Chaos and Classicism: Art in France, Italy, and Germany, 1918–1936 is the first exhibition in the United States to focus on the vast transformation in European culture between the world wars. With approximately 150 works by more than 80 artists, comprising painting, sculpture, photography, architecture, film, fashion, and the decorative arts, this thematically organized exhibition examines the return to order in its key manifestations: the poetic dream of antiquity in the Parisian avant-garde; the politicized revival of the Roman Empire under Benito Mussolini; the functionalist utopianism of International Style architecture that originated at the Bauhaus; and, ultimately, the chilling aesthetic of nascent Nazi society.

Chaos and Classicism is on view at the Solomon R. Guggenheim Museum in New York from October 1, 2010, through January 9, 2011, and will be presented at the Guggenheim Museum Bilbao, Spain, from February 21 through May 15, 2011.

This exhibition is supported in part by grants from the National Endowment for the Arts and The David Berg Foundation.

Exhibition Overview
The years after World War I were marked by a striking modernist avowal of traditional aesthetics: a retour à l’ordre (return to order) in France, a ritorno al mestiere (return to craft) in Italy, and Neue Sachlichkeit (New Objectivity) in Germany. Picasso was a leader of this new historicism and proved to be particularly influential in promulgating a classical aesthetic from 1918 to 1936.

Picasso, although Spanish, was based in France from 1904 onward, and his great classical figure paintings of the early 1920s demonstrate how decisively the Parisian avant-garde adopted the new post–World War I aesthetic. Chaos and Classicism presents several of his works, as well as other examples of this style, such as Léger’s canvases of mechanized figures and commedia dell’arte paintings by André Derain and Paris-based Gino Severini. The notion of a Latinate civilization comes to the fore in the emerging influence of Jean Cocteau, and the exhibition features excerpts from his 1930 film The Blood of a Poet (Le sang d’un poète). Le Corbusier’s architecture and design, as well as the Purist paintings he created alongside Amédée Ozenfant, forge a visual link with abstraction and Synthetic Cubism. Madeleine Vionnet’s neo-Greek fashion designs and Art Deco objects by Ruhlmann translate the more abstruse aspects of classicizing art and theory into functional items.

In Italy, de Chirico’s paintings, along with those of Carrà, bridge the transition to the New Sobriety of Italian art immediately after the war. De Chirico’s essay “Il ritorno al mestiere” (“The Return to Craft”), published in 1919 in the influential journal Valori Plastici, was especially vital for this classicizing moment as it renewed interest in the Italian Renaissance painters Fra Angelico and Piero della Francesca. Chaos and Classicism also includes paintings by artists such as Massimo Campigli and Giorgio Morandi. Architectural models and design objects, including a version of Giuseppe Terragni’s Casa del Fascio in Como, Italy, and porcelain by Ponti, demonstrate the power of the neoclassical paradigm for postwar Italian modernists. Sculpture, the quintessential classical medium, was especially strong in interwar Italy and is represented throughout the exhibition.

In Germany, Mies van der Rohe’s synthesis of classical form and modern technology was central to the ethos that challenged Expressionism in interwar Germany: iconic elements of his Barcelona Pavilion (1929), including Georg Kolbe’s Morning (Der Morgen, 1925), the life-size nude sculpture so well known from original photos of Mies’s seminal structure, are featured in the exhibition. Renowned Bauhaus teacher Oskar Schlemmer’s modernist figurative paintings testify to the German translation of the Italian revival (Schlemmer was deeply influenced by the art of Piero della Francesca, among others). Moreover, after the perceived excesses of Expressionist art, the Neue Sachlichkeit movement represented the search for aesthetic Klarheit (“clarity”) in Weimar Germany. Works by Dix, Georg Scholz, Georg Schrimpf, and Wilhelm Schnarrenberger reveal this rationalist approach along with August Sander’s radically pared-down photographic portraits. However, modern German aesthetics also leads viewers toward the exhibition’s dramatic conclusion. As the Weimar Republic collapsed and Adolf Hitler came to power in 1933, the new classicism—Parisian myths, Italian role-playing, and the German search for objectivity—was monstrously transformed into a quasi-scientific doctrine of human perfection under the Nazis.

Exhibition Installation
The exhibition is organized into eight sections that illuminate the dominant concerns and subliminal drives of European art and thought in this highly charged period. The themes are developed in a loosely chronological installation that winds up the Guggenheim Museum’s ramps and on two Annex level galleries.

High Gallery: In the Shadow of War: Chaos and Classicism
An introductory section installed in the High Gallery features a selection of 15 prints from Dix’s portfolio The War (Der Krieg, 1924), which recollect the destruction and trauma of World War I. These graphic depictions of the horrors of war are juxtaposed with works by Maillol and Picasso, as well as Italian and German sculptors such as Campigli and Hiller whose classical works can be viewed as an aesthetic rehabilitation of the ravaged body according to antique balance and measure.

Ramp 1: A More Durable Self
This section examines artists’ enthusiasm for depicting sculpture from antiquity or incorporating sculptural models into their compositions as exemplars of the human form—as more durable versions of the self, epitomized in Bissier’s painting Sculptor with Self-portrait (Bildhauer mit Selbstbildnis, 1928). Other artists represented include Hoerle, Suzanne Phocas, and Scholz.

Ramp 2: The Avant-Garde Looks Backward
In the years after World War I, the fragmentation and optical experiments of Cubism strikingly contrast with Picasso’s voluptuous, Grecian-robed women, ambling in the Mediterranean sun, or seated in peaceful repose, and Braque’s monumental canéphores (basket carriers). The postwar subjects of these classicizing artists, including Léger and Matisse, as well as photographer Edward Steichen, indicate a renewed interest in the roots of civilization, in Greece and Rome and their ruins. Several of Picasso’s most important works of this period are on view in this section, including The Source (La Source, 1921), on loan from Moderna Museet, Stockholm, and Woman in White (Femme assise, les bras croisés, 1924), from the Metropolitan Museum of Art, New York.

Ramp 3: Classical Bodies, New Humanity
The postwar search for a reassuring artistic language from the past led logically to sculpture. The idealized human form was reconceived by an international group of major sculptors including Kolbe, Maillol, and Arturo Martini. This fascination with the whole and intact body lent itself to politicized idealizations in the work of Hans Belling, Gromaire, and Léger on the left, and to the Italian Fascist art of Campigli and Oppi on the right.

Ramp 4: Crazy for Classicism
The revived interest in Greek and Roman history and myth, which had long provided the West with a shared narrative and archetypes, proved inspirational in not only painting and sculpture, but also photography, film, fashion, and the decorative arts. This section includes a film excerpt by Cocteau, photographs by Florence Henri and George Hoyningen-Huene, design objects by Ponti, furniture by Ruhlmann, and dresses by Edward Molyneux and Vionnet.

Annex Level 5: The Constructors
This section focuses on the architectural interpretations of classicism and the metaphors of construction and reconstruction that became ubiquitous in the wake of World War I’s devastation. The new modernist language sought a resolution of architecture’s past with the industrial present. Platonic ideas of geometric harmony and the beauty of new materials, especially glass and metal, were brought together in unprecedented combinations. Examples include Le Corbusier’s architecture and design, as well as the Purist paintings he created with Ozenfant. Works on view also consist of newly fabricated models of buildings by Le Corbusier and Terragni, objects and furniture designed for Mies’s Barcelona Pavilion, and chairs by Piero Bottoni for the Casa Minerbi in Milan.

Ramp 5: Classicizing the Everyday
Still lifes and portraits crystallizing the German Neue Sachlichkeit and Italian Novecento (1900s) movements demonstrate these rigorous approaches to representation and the desire to capture objective reality. The exhibition presents traditional painted portraits and self-portraits by Fridel Dethleffs-Edelmann, Dix, Carl Hofer, Morandi, Picasso, and Luigi Trifoglio, among others, as well as Sander’s typological photographic portraits, all of which assert classic fixity amid the flux of modern life.

Ramp 6: Performance/Anxiety
The performing body became a key element of modern culture between the wars. Developed, remade, and “perfected,” the body was the new measure of objective value, in contrast to the mind, now considered too abstract and subjective. Artists as stylistically and politically diverse as Willi Baumeister, Franco Gentilini, Gromaire, Albert Janesch, and Lorenzo Lorenzetti invoked the theme of sport in their work of the late 1920s and early 1930s. Circus, carnival, and commedia dell’arte imagery was treated by an equally diverse group including Derain, Antonio Donghi, Juan Gris, Erich Heckel, Hoerle, and Severini.

Annex Level 7: The Dark Side of Classicism
The exhibition concludes with a sobering look at the nationalistic pursuit of cultural roots and perfection, as gradually appropriated by the political right. Among the most notorious modern portrayals of antique Rome were paintings of gladiators by de Chirico, who was attacked by the Surrealists for his artistic collusion with the Fascist regime. The 1936 Olympic Games in Berlin were a classicizing spectacle, recorded and refashioned by the greatest Nazi propagandist, filmmaker Leni Riefenstahl in her Olympia (1936–38), excerpts of which are in this final section.