“To live in Venice or even to visit it means that you fall in love with the city itself. There is nothing left over in your heart for anyone else.” This well-known sentiment, from an essay by Peggy Guggenheim in a 1962 book by Michelangelo Muraro (Invitation to Venice), expresses the American collector’s feelings about Venice, where, after a nomadic life between Europe and the United States, she decided to make her home in 1948. A year later she acquired Palazzo Venier dei Leoni, on the Grand Canal, where she both lived and exhibited her collection of modern art, opening the palazzo to the public each summer from 1951 to 1979. At Easter 1980, not long after Peggy Guggenheim’s death (23 December 1979), Palazzo Venier opened to the public for the first time under the auspices of the Solomon R. Guggenheim Foundation, New York. 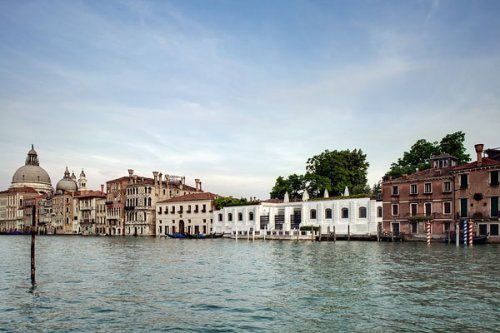 Thirty years on, the museum celebrates Peggy Guggenheim with twelve photographs, dating from 1958, by celebrated Bolognese photographer Nino Migliori, which document Peggy Guggenheim, her house and her art the way they were then. The photographs have been donated by Giovanni and Anna Rosa Cotroneo, themselves noted photography collectors, and will be on view to the public from April 7 through July 26 at the Museum Cafe.

The Peggy Guggenheim Collection celebrates its thirtieth anniversary with other surprises for its visitors. From April onwards, through December 2010, each Friday from 4-6pm, ‘Pay What You Wish’ will invite visitors to the museum to enter without purchasing a ticket, but by making instead a donation in an amount of their own choice, “what you wish”, in support of the museum’s operating expenses. This is practiced already by New York’s major museums, such as MoMA, the Metropolitan Museum of Art, the Guggenheim Museum and the Whitney Museum of American Art. The novelty in Italy of ‘Pay What You Wish’ at the Peggy Guggenheim Collection matches Peggy Guggenheim’s own spirit of generosity and enterprise and it is supported by Distilleria Nardini. Secondly, the museum welcomes visitors who can demonstrate with ID that they are thirty years of age to a complimentary visit to the museum, to its exhibitions and to Peggy Guggenheim’s collection of modern masters, from Picasso and Magritte to Kandinsky and Pollock. Thirdly, students from the Video Design and Sound Design courses at the Istituto Europeo di Design – IED are creating a ‘viral’ video that captures the museum’s spirit of innovation and originality.

Philip Rylands, Director of the Peggy Guggenheim Collection, summarized the spirit of this anniversary: “The museum looks at the next thirty years with optimism, and thanks all those who have generously helped us through the first thirty, such as the Regione del Veneto, the members of our Advisory Board, the Banca del Gottardo, now BSI in Lugano, and Intrapresæ Collezione Guggenheim. Above all we are indebted to Peggy Guggenheim’s genius, and to the supreme quality of her collection of great modern art.”