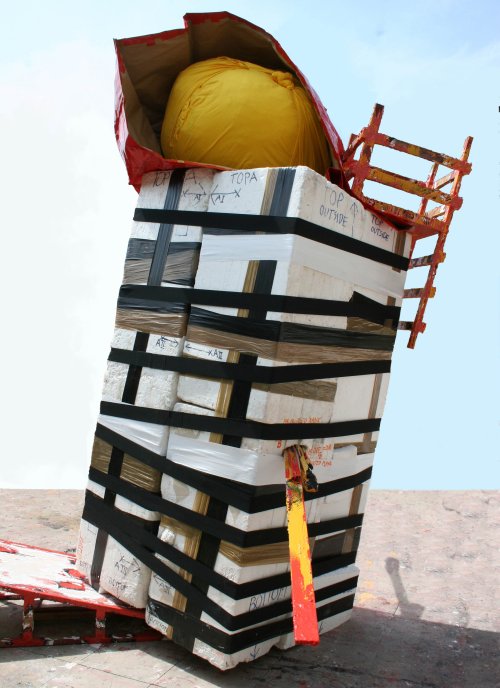 The Serpentine Gallery presents an exhibition of the work of artists Nairy Baghramian and Phyllida Barlow. The exhibition presents two positions on sculpture in the 21st century.

Phyllida Barlow (b. United Kingdom, 1944) is a pioneering English artist whose sculptural installations are characterised by their large scale, often made quickly in the same place that they are to be shown with materials that are subsequently recycled for future use.
Their often rough appearance conveys the urgency with which they are produced. In addition to being a practising artist since the 1960s, Barlow has had a long teaching career, tutoring several generations of students who have gone on to become distinguished artists.

Nairy Baghramian (b. Iran, 1971) is a Berlin-based artist known for her sculptural installations and photographs. Her complex work includes elements of re-worked design, minimalist and modernist architecture. It encompasses questions of context, institutional framing and the production and reception of contemporary art. Well represented in Europe, this is Baghramian’s first exhibition in a major public institution in the UK.

Baghramian and Barlow’s installation will include rooms displaying solo presentations of their work as well as spaces where works are placed in dialogue with each other. This exhibition will offer a new perspective on these two artists.

Although strikingly different in their approach, a number of key concerns are addressed by both artists. For instance central to Baghramian’s work is how art historical debates around minimalism, literature and design are translated into specific decisions about materiality, manufacture and display. Whilst Barlow’s work engages with related questions, it reaches contrasting conclusions.

Responses to context are also a shared interest; Barlow often uses a work’s location as a starting point for its dimensions and form, as well as actually constructing some works in situ, whereas Baghramian’s work deals with the relationship between sculptural forms the spaces they inhabit.