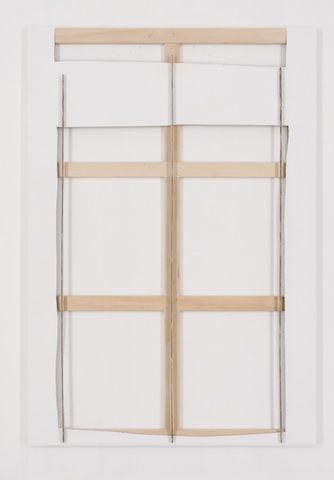 Over the past decade, Richard Aldrich (b. 1975, Virginia) has assiduously orchestrated an eclectic body of work that reveals, in all its variation, a consistent sensibility: a keen appreciation for the complex disposition of painting and its potential to reveal the intimate and nuanced experiences that exist outside language. For his first solo museum exhibition, on view from January 21, 2011 through May 1, 2011, the Contemporary Art Museum St. Louis presents nearly twenty of the artist’s large-scale works, produced over the last several years that span abstraction, figuration, “object-paintings,” and text-based canvases. The Contemporary is also very pleased to announce a special collaboration on this occasion of this show: with the generous cooperation of the Saint Louis Art Museum, Aldrich will present, alongside his own works, a selection of 19th and 20th century painting from the museum’s permanent collection. Taken together, this exhibition proposes a dialogue between painterly histories and social gestures, through the adventurous vision and diverse practice of one of the foremost figures in a new generation of painting.
Aldrich makes paintings, large and small, that range from effusive and flurried abstractions; spare object-based canvases; and graphic, melancholic figuration. While certain works might suggest familiar tropes within painting’s recent history, Aldrich revels in the vulnerability of assumed certainties, and he actively refuses facile stylizations or predictable forms. He works on primed linen with a mixture of oil paint, mineral spirits, and wax, regularly shifting from large, tenderly gestural paintings to thrifty canvases that hold fragments of cloth or wood. In other works, he emphasizes abutting or layered passages of color for dense abstraction. Aldrich is recognized for a deep engagement with the aesthetics of painting’s recent history, often drawing from historical stratagems to build a correspondence between distinct forms and narratives. However, his painting remains rooted not to a reiteration of history, but to his own story, and to what he calls “the otherworldliness of experience.”
Alongside his rendering of familiar techniques, his practice also assumes systems of repetition, selfquotation, and translation; and with each retelling, our grasp on the knowable or familiar is loosened in exchange for a heightened awareness of form.
Aldrich’s practice is both decidedly literary and deeply personal, focusing on relationships, routine experience, and reading as the subjects for his paintings. The works themselves are deeply interconnected, drawing together elements of the studio, and the cosmos of canvas scraps and books that fill it. From a color slide, a page of prose, or even a sliver from a discarded frame, Aldrich repositions these objects as protagonists on the canvas. His poetry and meandering fairytales, as well as his music (Aldrich plays solo and participates in the band Hurrah with a group of fellow New York artists), also inform his painting. These and others form a technical arsenal comprising a sincere and unflinching curiosity; a will to push painting forward; and a foothold between innocence and understanding.
The paintings in this exhibition take over half of the Contemporary’s Main Galleries to showcase the startling breadth of Aldrich’s aesthetic investigations. In his most comprehensive installation to date, Aldrich arranges his large canvases to reveal intricate relationships and persistent correspondence between the works. To amplify this focus on hidden connections among the works in his show, Aldrich has curated a complementary selection of early modern paintings from the collection of the Saint Louis Art Museum. Exploring the communicative possibilities of different histories and gestures, the artist uncovers idiosyncratic works of art and unexpected juxtapositions, inviting Contemporary visitors to consider how a narrative develops from the process of looking. Presented as an exhibition-withinexhibition, he explores stories that might go untold but are present nonetheless, considering the life of an art object outside traditional contexts. Paired with his own exhibition of works, Aldrich presents a playful installation that considers the magic of and new possibilities for painting today.