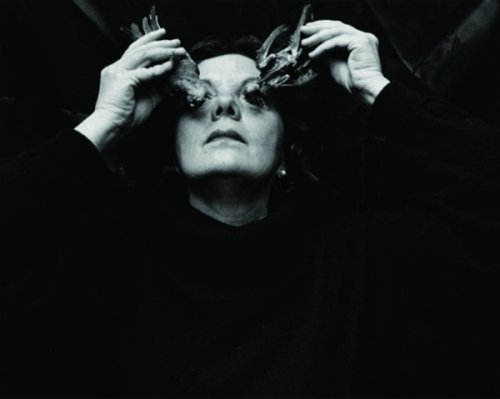 [ad#lb]
Eyes to Fly With features the compelling photographic work of Mexican, female photographer Graciela Iturbide. This 58-photograph retrospective is organized by the Wittliff Collections, Texas State University, San Marcos and showcases some of the most distinguished and iconic photographs in this artist’s oeuvre, including her interpretation of the indigenous culture of the Zapotec in the Juchitán and the Seris of the Sonoran desert.

Considered one of Mexico’s greatest photographers, Iturbide was born in Mexico City in 1942 and studied filmmaking and scriptwriting at the Universidad Nacional Autónoma de México from 1969 to 1972. At the time, Iturbide was strongly influenced by her mentor and professor, Manuel Álvarez Bravo, who instigated in the young artist a need to discover her country and its distinct cultures through photography.

The relationships between man and nature, the individual and culture, the real and the psychological are the prevailing themes that one experiences when viewing and understanding Iturbide’s highly diverse photographic career. Iturbide comments, “With the camera you interpret reality. Photography is not truth. The photographer interprets reality and, above all, constructs his own reality according to his own awareness or his own emotions. Sometimes it’s complicated because it’s a kind of schizophrenic phenomenon. Without the camera, you see the world in one way and with the camera in another…”

This exhibition is funded in part by the C. Homer and Edith Fuller Chambers Charitable Foundation, Dorothy Anne Conn, Southeast Texas Arts Council, State Farm Mutual Automobile Insurance Company, Texas Commission on the Arts and with a grant from Humanities Texas, the state affiliate of the National Endowment for the Humanities.

Paired, Gold: Felix Gonzalez-Torres and Roni Horn The Madonna as Muse: The Paintings of René Alvarado