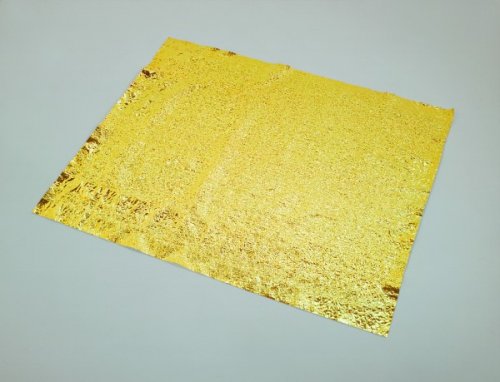 [ad#lb]
On October 2, the Solomon R. Guggenheim Museum opened Paired, Gold: Felix Gonzalez-Torres and Roni Horn, an exhibition that brings together two important works from the permanent collection for the first time and illuminates the profound artistic connection between Felix Gonzalez-Torres (b. 1957, Guáimaro, Cuba; d. 1996, Miami) and Roni Horn (b. 1955, New York).

Suspended from the ceiling, “Untitled” (Golden) (1995) by Gonzalez-Torres is a shimmering curtain of golden beads and acts as a site of passage, opening onto Horn’s delicate, gold floor piece Gold Field (1980–82). Organized by Nancy Spector, Chief Curator with Lauren Hinkson, Assistant Curator for Collections, Paired, Gold is on view through January 6, 2010.

In 2008, the Guggenheim Museum acquired “Untitled” (Golden) through a joint purchase with the Art Institute of Chicago and the San Francisco Museum of Modern Art. One of his lustrous beaded curtains, which are used as room dividers or suspended in doorways through which the viewer must pass, the work consists of rows of faux-gilded beads that compose a luminous membrane, at once transparent and emphatically tactile. Like Gonzalez-Torres’s candy spills, the curtain invites interaction, and, in the spirit of his illuminated light-strings, it evokes a sense of festivity.

Measuring just over one-one hundredth of a millimeter in depth, Roni Horn’s rectangular sheet of pure, annealed gold is a nearly volumeless sculpture. Yet, laid directly on the floor without a pedestal, it is in fact not so much a sculpture as the material of gold itself—“the simple physical reality,” in the artist’s words. Encountered together in the exhibition, the paired works reflect a critical engagement with the legacy of Minimalism and the emotive possibilities of form. The fragile beauty of the works suspends commonplace meanings attached to gold as a source of wealth and extravagance, inviting instead a kind of poetic reverie on its materiality and symbolic resonance.

Paired, Gold represents the aesthetic dialogue between Gonzalez-Torres and Horn as embodied in an exchange of gold, a reciprocal gift between the two artists that resonates with the poetry of their respective projects. In 1990 Gonzalez-Torres visited Horn’s solo exhibition at the Museum of Contemporary Art in Los Angeles, where he first encountered Forms from the Gold Field (1980–82), in which Horn compressed two pounds of pure gold into a luminous rectangular mat. After meeting Horn three years later, Gonzalez-Torres received a square of gold foil in the mail from her as a symbol of their new friendship and shared sensibilities. He was so inspired by the generosity of her gesture and the expansiveness of her subtle work that he fashioned his own “gold field” in her honor: “Untitled” (Placebo – Landscape – for Roni) (1993), an endlessly replaceable candy spill of gold cellophane–wrapped sweets.

About Felix Gonzalez-Torres
Felix Gonzalez-Torres was born in Guáimaro, Cuba, in 1957. He began studying art at the Universidad de Puerto Rico before moving to New York, where he participated in the Whitney Independent Study Program, received a BFA from the Pratt Institute, and in 1987 earned an MFA from the International Center of Photography, New York University. In 1990 he began exhibiting with Andrea Rosen Gallery, which continues to represent his work today. During his lifetime, Gonzalez-Torres was the subject of several important museum exhibitions, including Felix Gonzalez-Torres: Traveling in 1994 at the Museum of Contemporary Art, Los Angeles; the Hirshhorn Museum and Sculpture Garden, Smithsonian Institution, Washington, D.C.; and the Renaissance Society at the University of Chicago, as well as a 1995 retrospective organized by the Solomon R. Guggenheim Museum, New York, which traveled to the Centro Galego de Arte Contemporánea, Santiago de Compostela, and the Musée d’Art Moderne de la Ville de Paris. Gonzalez-Torres participated in hundreds of group shows during his lifetime, including early presentations at Artists Space and White Columns in New York (1987 and 1988, respectively); the Whitney Biennial (1991); the Venice Biennale (1993); SITE Santa Fe (1995); and the Sydney Biennale (1996). Recent exhibitions include a retrospective at the Hamburger Bahnhof–Museum für Gegenwart, Berlin (2006–07), and in 2007, Gonzalez-Torres was selected to represent the United States at the Venice Biennale in the exhibition Felix Gonzalez-Torres: America. Gonzalez-Torres died on January 9, 1996.

About Roni Horn
Born in New York in 1955, Roni Horn studied at the Rhode Island School of Design before earning an MFA from Yale University in 1978. Horn’s diverse body of work includes drawings in pigment and varnish, sculpture, an ongoing series of artist’s books, and several public artworks. In 2007 Horn created a long-term installation and community center entitled Vatnasfn/Library of Water in Stykkishólmur, a town on the western coast of Iceland. Horn’s numerous solo exhibitions include shows organized by the Museum of Contemporary Art, Los Angeles (1990); Kunstmuseum Winterthur, Switzerland (1993); Kunsthalle Basel (1995); Kestner-Gesellschaft, Hannover (1995); Musée d’Art Moderne de la Ville de Paris (1999); Dia Center for the Arts, New York (2001–02), Centre Georges Pompidou, Paris (2003–04), and Art Institute of Chicago (2004). Her work has been included in many group exhibitions, including the Whitney Biennial (1991 and 2004), Documenta (1992), Venice Biennale (1997 and 2003), Sydney Biennale (1998), Moving Pictures at the Solomon R. Guggenheim Museum (2002–03), and True North at the Deutsche Guggenheim in Berlin (2008). Horn has received various awards, among them, a Ford Foundation grant (1978) along with fellowships from the National Endowment for the Arts (1984, 1986, and 1990) and John Simon Guggenheim Memorial Foundation (1990). In 2004, she was a visiting critic at Columbia University in New York. In 2009, a major retrospective Roni Horn aka Roni Horn was organized by the Tate Modern and the Whitney Museum of American Art in New York, where it will open in November.

The Masterworks of Charles M. Russell: A Retrospective of Paintings and Sculpture Eyes to Fly With (Ojos Para Volar): Photographs by Graciela Iturbide