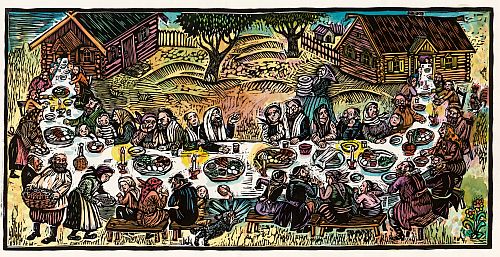 The Delaware Art Museum is pleased to present Imagined Places: The Art of Alexi Natchev, on view March 2 – August 4, 2013. This exhibition showcases the work of celebrated illustrator and Delaware College of Art and Design professor Alexi Natchev, whose illustrations conjure up an imaginary world of playful creatures, fairy-tale places, folktales, and more. Imagined Places features over 60 works by Natchev, including paintings and prints representing the range of his career as an artist and illustrator.

Alexi Natchev was born and educated in Sofia, Bulgaria. Since moving to the United States in 1990, he has illustrated 17 children’s books, collaborating with major authors and publishers. His work has been shown in many international exhibitions and he has received a number of national and international awards, including the 2013 Sydney Taylor Book Award for Younger Readers for his evocative hand-colored relief prints for The Elijah Door─A Passover Tale. Natchev was also the 2001 recipient of the prestigious Artist Fellowship from the State of Delaware and is currently the Illustration Area Coordinator at Delaware College of Art and Design in Wilmington, Delaware.

As an artist intent on capturing details of place and costume, Natchev often researches the art and literature of a region for his illustrations, creating a sensitive balance between fantasy and believability. This can be seen in the bright and fanciful watercolor paintings for popular children’s stories such as Brian Jacques’ The Tale of Urso Brunov: Little Father of All Bears (2003) and Urso Brunov and the White Emperor (2008).

In Natchev’s prints, allusions to historical events and figures often become mysterious images, suggestive of power, conflict, and romance. Depictions of leaders from Bulgaria’s independence movement, such as Vasil Levski and Georgi Danchov, reveal a deep connection to his Bulgarian roots.

“Alexi Natchev is deservedly celebrated for his colorful and imaginative children’s books and is an accomplished printmaker with impressive fluency in various techniques,” says Mary F. Holahan, Curator of Illustration. “We are thrilled to be able to display the whimsical and sometimes enigmatic illustrations of such a distinguished artist of our region.”