Elvis at 21: Photographs by Alfred Wertheimer
Muhammad Ali: The Making of an Icon
Michener Art Museum
February 19 – May 15, 2011 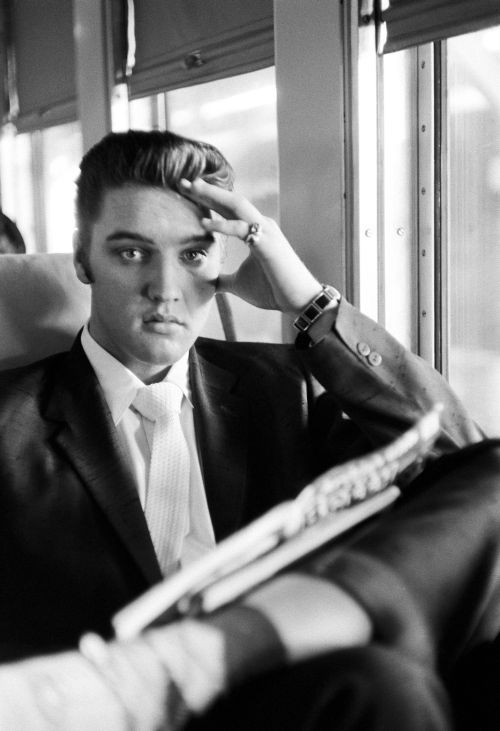 What is so remarkable about Wertheimer’s documentary portraits of Elvis is how fresh and contemporary the pictures still seem, utterly unlike any other portraits of this endlessly scrutinized figure. Forty large-format Wertheimer photographs chronicle Elvis’s dazzling emergence in a pivotal year, 1956. Created by master printer David Adamson, these 37 x 42” prints radiate a richness and depth that make Elvis’s road to fame palpable. With cinematic luminosity, the Wertheimer photographs document a remarkable time when Elvis could sit alone at a drugstore lunch counter. We are there, before Elvis became an icon and constant security created walls between him and his fans.

Muhammad Ali: The Making of an Icon chronicles the life and times of a now-iconic figure who was simultaneously the most beloved and most hated man in boxing and who still engenders a strong emotional response from people almost fifty years after his initial rise to public prominence. The exhibit provides a glimpse of rarely seen moments of his personal life as well as more famous episodes from his career. These images not only illustrate the enormous changes that he went through—from a patriotic Olympic champion to a draft-resisting member of the Nation of Islam to a figure of racial reconciliation—but also show that Ali’s gregarious, funny, and likable personality remained intact even as a super-charged political atmosphere swirled around him. This exhibition tells the story of an American hero who has come full circle in the hearts and minds of people throughout the world, and features more than 50 photographs by such distinguished photographers as Annie Leibovitz, Gordon Parks, and Art Shay.

Elvis at 21, Photographs by Alfred Wertheimer was developed collaboratively by the Smithsonian’s National Portrait Gallery, the Smithsonian Institution Traveling Exhibition Service, and Govinda Gallery, and is sponsored by HISTORY™. Muhammad Ali: The Making of an Icon was organized by Art2Art Circulating Exhibitions.