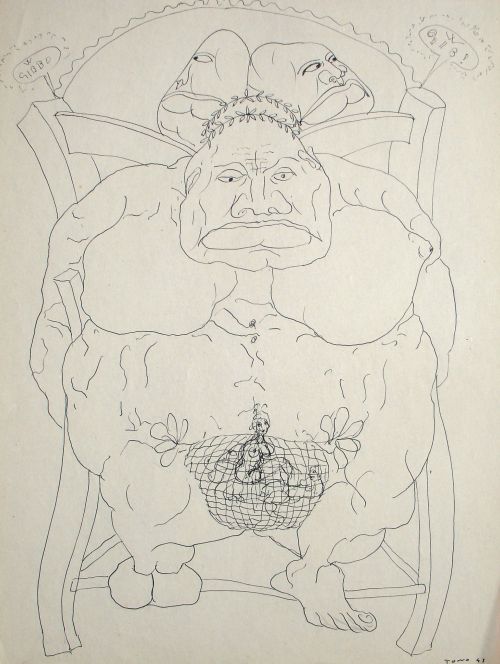 Whilst several major exhibitions have explored the propaganda imagery of Fascist Italy, art produced by those opposed to Mussolini and his regime has received surprisingly little attention in recent years. Against Mussolini brings together works produced in Italy and abroad throughout the Fascist era (1922-43), but focuses particularly on the period immediately after the dictator’s fall from power following Italy’s disastrous Second World War campaign. These last tragic years saw the re-emergence of Mussolini as the puppet leader of a Fascist administration in the north of the country – now occupied by German forces – and the onset of a bitter civil war, as the Resistance fought alongside the Allies to restore democracy and liberate Italy from tyranny.

For the vast majority of Italians, the failings of the dictatorship and the horrors of war were sufficient to end any attachment to Fascism’s dreams of building a mighty nation. The destruction of many Fascist symbols and images of Mussolini reflected the widespread anger generated by the hardships and setbacks of the war. Artists such as Renato Guttuso, Mario Mafai and Mino Maccari shared these feelings, and in several cases anticipated them.

Many of these works are characterised by a demonisation and a desecration of the Duce, once hailed as a demi-god but now depicted as a grotesque figure of tragic or comic proportions. Others are meditations on the tragedy of the Nazi occupation and civil war in powerful imagery foreshadowing the revival of realism that was to become the dominant aesthetic tendency of post-war Italian art. Together they present a unique insight into the way the visual arts responded to a period of transition that still remains controversial today.

They also provide something more: a stark condemnation of the vanities of dictatorship and of the violence that is an intrinsic part of Fascism.