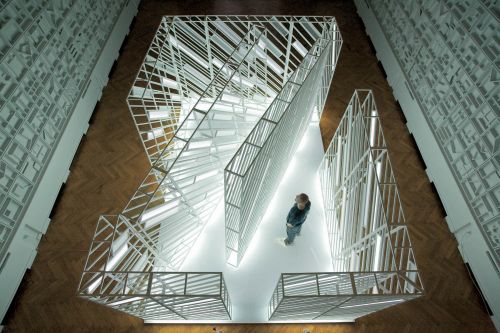 On Wednesday, September 15th at 3:00 p.m., Palazzo Righini di San Giorgio (Fossano) is opening an new season of expositions with an exhibition, produced by the Centro Culturale Teresa Orsola Bussa de Rossi, dedicated to fifteen site specific installations projects of Petar Barišić, a Croatian artist of international renown, exponent of the contemporary museum sculpture (from September 16th to October 15th 2010; open to the public: all days from 3:00 p.m. to 7:00 p.m.; closed on Sunday).
At the same time, it will be on show a selection of the works of Carl André, Giovanni Anselmo, Dan Flavin, Jeff Koons, Luigi Mainolfi, Fausto Melotti, Robert Morris, Bruce Nauman, Lucia Nazzaro, Claes Oldenburg, Giuseppe Penone, Gianni Piacentino, Robert Rauschenberg, Jim Sanborn, Richard Serra and Valerio Tedeschi.
The collective exhibition will be housed afterwards by the Résidence des Artistes (Kalaa Kebira – Tunisia) from November the 1st to 30th 2010 whereas Petar Barišić’s projects will be on show at the Tunisian Museum from January 5th to 30th 2011 and at the Chrysler Site (New York) in February 2011 together with the works of the Turin artist Lucia Nazzaro.

If I were to describe by one single word that what characterizes Petar Barišić’s works produced in the course of the last three decades, the chosen word would probably be the bridge. […] It is possible to recognize the application of the similar principle in the site-specific installation White constructed in the Art Pavilion in Zagreb in 2008. Beneath the dome of that historicist building he placed two-part octagonal tower constructed by tiny wooden battens and the perspex plates with incorporated LED lighting in the position of the sloped balance. That tower refered to one of the crucial works of 20th century historical avant-gardes, the famous Tatlin’s model for the Monument to the Third International from 1920, the work that today connotes not only the constructivism, but above all the notion of utopia. White, irradiating, mirroring surface of Barišić’s tower’s floor opened the view in the abyss of reflection. The figure of reflection imposed itself in this light environment simultaneously in a sense of the optical illusion and the mental activity that requires connecting. Connecting in the sense of bridging the temporal, spatial morphological, typological barriers and those of meaning as well. The site-specific installation White that besides the nine-meters tower contained two irradiating constructions placed in the lateral wings of the Art Pavilion and 1602 box-like wooden reliefs, thematized the same issues, albeit by a different vocabulary, as did the Barišić’s sculptures produced in the last two decades of 20th century – first and foremost, the existence or the non-existence of the borderline that divides the interior space from that which is exterior.
[…] It is just that receptive imperative of the live bodily perception that reaches beyond vision that what is stressed by the most complex site-specific work of Barišić installed in 2009 in the Boæidar Jakac Gallery which is the former Cistercian gothic basilica at Kostanjevica na Krki (Slovenia). The installation entitled Deaf Bell comprises by its referential field the very historicity of the site where the performance takes place. I am deliberately using the term performance for, connoting a kind of theatricality, that term implies a temporal dimension of the happening. By imposing the pendulum of the bell as the basic referent, Barišić’s work bridges the time abyss (fictional or real, who knows?) that separates the past centuries from the actual moment, furthermore, the binary opposition of sacred and profane and the heterogeneity of the artistic stiles and tendencies from the gothic period to the contemporaneity. The bell, that exterior element, certainly lacks today to the building that has been transformed from the sanctuary into the space for exhibiting the art. The bell as the origin of the sound that calls not only on the prayer and contemplation, but make us aware of the time in which we, as a live bodies, become and disappear. The giganticized motif of that exterior, functional part – the pendulum swinging in the unstoppable process is the act of inscription in the very tissue of the Kostanjevica’s basilica. Thirteen meters long pendulum constructed by tiny tubes of highly polished inox, anchored in the vault of the basilica, unceasingly swings along its central nave inscribing the invisible but audible time arch. Barišić installed nine shiny rotating aluminium discs on the side aisles’ walls and in apses. Each of them contains movable elements of different shapes that produce very specific sounds of percussion during the rotation. Reflecting, irradiating light at the same time writes the discrete kaleidoscopic text on the white walls of the basilica, the text that bridges the frontier between the image and its time, between the sound and its duration, between the stillness and the movement, between the states of things and their semblances. (Leonida Kovač)