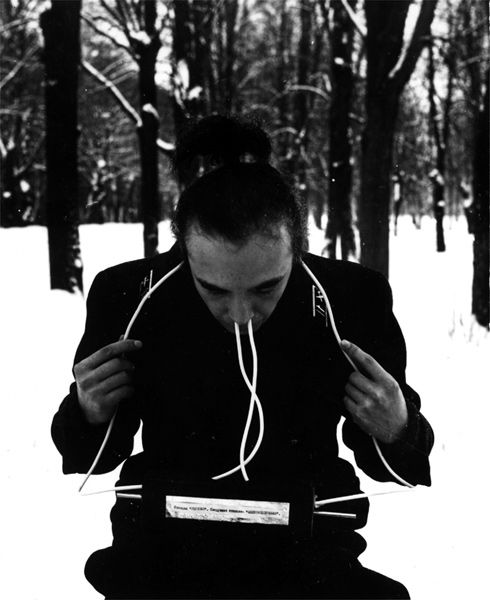 Moscow Museum of Modern Art and VICTORIA – the Art of being Contemporary Foundation are pleased to announce a solo exhibition of Andrei Monastyrski, one of the most important Russian contemporary artists, a leader of Moscow conceptualist school.

The aesthetic field created by Monastyrski is composed of a number of equally significant components – artworks, theoretical texts, performances, poetry, and documentations of Collective Actions group, of which he is the leader and the driving force since 1976. This first museum exhibition of Monastyrski is the starting point for the theoretical comprehension and representation of the artist through a retrospective of his installations.

The exhibition intends to start building a synthetic overview of the artist’s work over the past 30 years, based on installations and documentations of Collective Actions performances. It features the works previously not shown in Moscow – Fountaininstallationthat toured major European museums, Goethe, the work of 1976 exhibited at Documenta XII in Kassel and in Chicago, as well as new installations – Corridor of CA and Encasements.

Presenting the exhibition, Andrei Monastyrski writes:
«Most of my installations are based on performances of ‘Collective Actions’ group. <…>
The work of CA can be equally treated as literature (‘novel’), visual arts (performance, installation) and music (audio discourse). Different times require different lattice actualisations of Collective Actions materials. CA never engaged in art as a process of manufacturing tangible objects of art. Its meta-position is in its existential and aesthetic practices, in aesthetic discourse. The process has always been and remains much more important for us than the result…Space and time are main characters of ‘Trips out of Town’ by CA, rather than the viewers or us, their authors and organisers.

In the 1970-80s, within the Russian conceptual art movement, as well as in the West, Collective Actions was regarded as the cutting edge of contemporary art, as ‘art after philosophy’. These books are nothing short of the history of contemporary art in the USSR and post-Soviet Russia. This was an art of international level; it poised and resolved most general problems and issues of art theory: in plastics, in style, in discourse. The same problems and issues were common for the international evolution of contemporary art: from Duchamp and Dada, through Fluxus, John Cage, Dennis Oppenheim, and Chris Burden to Vito Acconci, Bruce Nauman and many others.”

The exhibition catalogue to be published later is to bring new opportunities to ‘lattice actualisations’of the work by Andrei Monastyrski. Robert Storr, Klaus Biesenbach, and IlyaKabakov, the key figures of the international contemporary art scene will present both a universal perspective and the personal viewpoint on his work in their essays and dialogues with the artist.