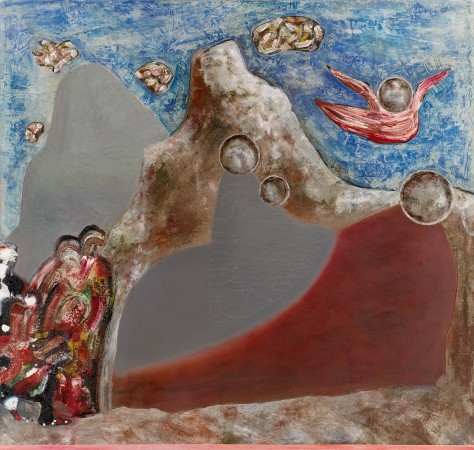 The Moscow Museum of Modern Art presents the Giotto Project, an exhibition of works by Evgeni Dybsky, one of the prominent artists of the 1980s Metarealism. In terms of painting, Dybsky is still on the quest. The exhibition features his series «Translation of Time XVI.» The works of the series are done in mixed media. Some of the works were previously exhibited in the Ludwig Museum in 2009.

The Giotto Project is designed to immerse the spectator in the processes of perception and recollection. In today’s digital era when the world is replete with images and information through the mass production of the above for subsequent circulation by means of the Internet, Dybsky’s art prompts us to get back to the contemplation of materiality of painting. In contrast with the present-day infatuation for «appropriation art,» Dybsky offers us an opportunity to partake in his dialogue with Giotto.

Since 1992, Evgeni Dybsky has been using the expression «Translation of Time» for the name of a series of his works. The artist lays emphasis on the similarities between the pronunciation of the English translation and that of the Russian word трансляция. In fact, the two share one of the meanings that stands for «the retransmitting or forwarding of a message.» The name of the series has to do with the use of energy «retransmitted» by the images of the past. Sixteen series of «Translation of Time» has been produced so far. News forms and techniques are combined with the old ones in this series of «Translation of Time.» In 1988, Dybsky first saw the frescoes of Giotto di Bondone (1266 — 1337) in Cappella degli Scrovegni while visiting Padua for the first time. In 2005, during one of his subsequent trips to Padua, Dybsky could observe the results of a recent restoration job. The frescoes had been «restored» in a manner that effectively effaced their original appearance or so it seemed to Dybsky at the time. Is there any originality left in the restored frescos? What was the essence of the frescoes and how it is perceived nowadays? Those were the questions that gave Dybsky an impetus to set off on his artistic quest. The «loss of the original appearance» became a starting point for the artist in terms of applying his retro-perspective methods for the search of the original coloration of the frescoes so as to continue the development of his methods in the future.

The cracks and ruptures in Dybsky’s paintings bear evidence of a «life-giving» ageing process. The cracks and ruptures attach the duality of an unfinished object to a painting; the object is in the midst of a synchronized process of formation and destruction. The above have been the major themes of Dybsky’s painting for many years. The use of oil paint, tempera and emulsion on the cracked and rugged surfaces; the clearly outlined color contrasts and boundaries of a form along with the flowing color shadings make evident an apparent interest in the material side of painting.

To bring out a number of unexpectedly witty and paradoxical effects, the artist has been long using different media and materials combined in a variety of ways. The materials and media include: canvas or fiberboard, paints, emulsions, rock, foam plastic, manmade fibers, hair.
The employ of the above is in full compliance with the credo of Evgeni Dybsky who is certain that «painting is meant for those who can take pleasure in the sensations, not in the anecdotes.»