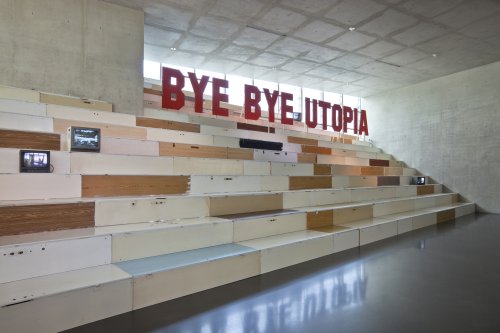 Starting in July 2010, the program of the KUB Arena, which was conceived as a platform for art and communication, will be activated more intensively than previously. Not so much to create an additional space for the classic presentation of contemporary art, but rather to open a venue for the negotiation of experimental forms of presentation and artistic production. The new program will be launched with a contribution from the architects collective raumlaborberlin (lit.: space laboratory Berlin).

In the KUB Arena, raumlaborberlin has undertaken an architectural intervention reflecting the main concerns of the group and simultaneously marking the space of the Arena as an autonomous location. A sloping plane
cutting diagonally through the ground floor creates a second space which is accessible from the rear of the building. Above this slope, a walkable landscape made of doors from typical former East German ‘Plattenbauten’ (buildings constructed from concrete slabs) permits new perspectives on the
architecture of the Kunsthaus. The construction space beneath the surface serves to present the so-called ‘raumlaborwelten’ (lit.: space laboratory worlds) while indirectly referring to the inaccessible utility spaces in between the exhibition floors of the Zumthor building. With various media, past actions, projects, as well as theoretical references by the collective are presented here.

raumlaborberlin was established in 1999 as a platform for architects who since then have been pursuing a common aim in various working groups, namely a practice “beyond setting up rows of boxes for working, living, and sleeping.” Inspired by currents of Utopian avant-garde architecture in the 1960s, the collective playfully subverts apparently indispensable values of architecture such as its durability, in order to develop, with temporary interventions and ephemeral spatial concepts, alternative design options at the margins of an all too one-dimensional concept of architecture. It investigates urban transformations in order to fathom new perspectives in architecture and urban planning beyond the capitalist logic of usefulness and profitability. Whether it be as a reaction to the conservative, regimented architectural policy in Berlin during the 1990s, to the increasing privatization of public places, or to the buildings and fallow spaces in the urban landscape
that have been deserted by Utopias, the collectively realized actions challenge conventional social meanings of urban utilization of space and investigate alternative potentials for architecture and urban space as
dynamically experienceable and malleable social interconnections.

Apart from the core team consisting of Francesco Apuzzo, Markus Bader, Benjamin Foerster-Baldenius, Andrea Hofmann, Jan Liesegang, Christof Mayer, Matthias Rick, and Axel Timm, there is regular co-operation with experts from various disciplines in theory and practice. Here, too, the collective practice is understood as a continually expanding field. By activating forgotten or deserted fallow urban spaces, new public spaces are created — spaces for action which do not exist somewhere beyond individual practice, but only become activated through it, opening up alternatives to existing everyday practices. raumlaborberlin does not produce
within projective Utopias, but within graspable fields of possibility.

For more than a decade, internationally active raumlaborberlin has been defining with sustainable interventions an extended, socially dynamized concept of architecture. For the project Hotel Neustadt in 2003, the architects developed informal urban strategies which have become exemplary also for sustainably effective co-operation between residents and artists. With X-Wohnungen (2005), Der Berg (2005), Küchenmonument (2006), and Der Orbit (2006) there followed a series of experiments defining vacant urban spaces as theatrical free-space. Subsequently, Spacebuster (2009) was developed at the invitation of Storefront for Art and Architecture New York. It is a bus from which a pneumatic envelope unfolds as a bubble with which the urban space is temporarily opened for communal uses. Apart from temporary architectures in urban space, raumlaborberlin has developed works in co-operation with the Kunstverein Heidelberg, the ZKM in Karlsruhe, transmediale 2010, and Kampnagel Hamburg. This year the collective will be represented for the fourth time at the International Architecture Biennale in Venice.