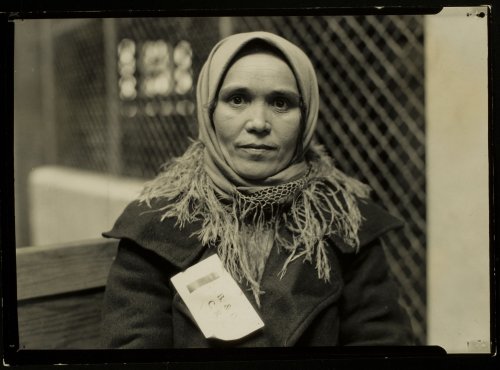 For twelve million people, Ellis Island was the doorway to a new life, with the hopes and dreams of several generations of immigrants beginning and sometimes ending there. Understandably, this American landmark in New York Harbor has deeply inspired many artists. Most notably, the legendary photographer Lewis Hine (1874-1940) documented the human drama as it unfolded at the immigration center in the early 1900s, while the acclaimed contemporary photographer Stephen Wilkes captured the long-abandoned buildings of the island’s hospital complex nearly 100 years later.

Organized by the James A. Michener Art Museum, with the cooperation of the George Eastman House and ClampArt Gallery, New York, Ellis Island: Ghosts of Freedom offers an extraordinary look at this uniquely American experience through the lenses of two renowned photographers. The exhibition is on view from June 26 through October 10, 2010 in the Museum’s Fred Beans Gallery.

“It’s hard to imagine a place that says more about the American experience than Ellis Island,” says Brian H. Peterson, the Museum’s Gerry and Marguerite Lenfest Chief Curator. “These two photographers–Wilkes and Hine–complement each other beautifully. Wilkes shows us the poetry of long-abandoned and forgotten spaces, while Hine helps us honor and remember the men and women who walked down those corridors and slept in those hospital beds–our grandfathers and grandmothers, people known and unknown, whose lives were forever changed by their experience at Ellis Island.”

Now famous for his documentary photos of the post war American labor force–including the men who constructed the Empire State Building, Lewis Hine was a student at New York University in 1904 when he first got involved with a project to photograph immigrants at Ellis Island. As anti-immigrant sentiment was pervasive, Hine’s charge was to portray the newly arrived with the same dignity and respect as those immigrants who landed at Plymouth Rock. Through these evocative black and white images and his later work for the National Child Labor Committee and the American Red Cross, Hine ultimately became known as the most successful social welfare photographer of his time. Included in this exhibition are fifteen vintage Hine photographs of Ellis Island, drawn from the collection of the George Eastman House.

From 1998 to 2003, New York photographer Stephen Wilkes had free reign of Ellis Island’s hospital complex where ill children and adults were detained before they could enter America. Neglected for nearly fifty years, these buildings were in an extreme state of disrepair: lead paint peeled from the ceilings and walls, vines and trees grew through the floorboards of once cramped wards. Wilkes discovered an unyielding solitude, yet also found undeniable evidence of life, not only in the implicit remembrances of the people who resided there, but in the radiant, beckoning light of these forsaken spaces. ARTnews writer Rebecca Robertson notes how Wilkes’ 4×5 photographs reveal a myriad of colors: “Light from the first or last minutes of the day streams through windows, turning rooms violet or deep rusty orange. Robin’s egg blue and grass green paint flaking off walls brings to mind canvases of Van Gogh.”

What started as a personal five-year obsession for Wilkes turned into a hugely successful body of work and a publication that helped secure $6 million in funding from the United States Congress towards restoration of Ellis Island’s abandoned south side. As the artist states, the “triumph was not without irony. In stabilizing the buildings, many repairs have been made and many of the encroachments of nature removed. The place will never again look as it does in these photographs.”