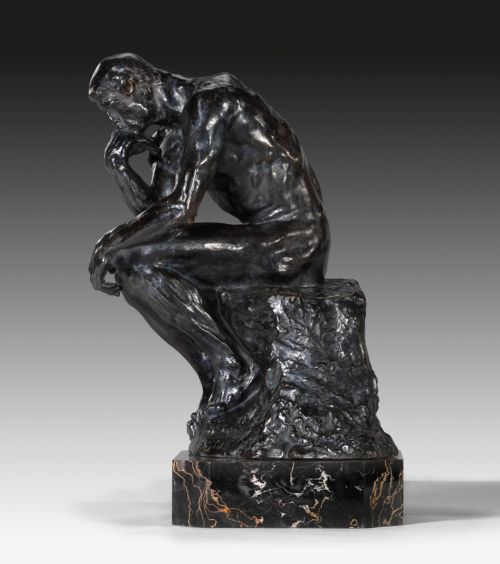 Auguste Rodin (1840–1917) was arguably the most celebrated sculptor of the 19th century, and his innovative modeling technique and unconventional subject matter earned him praise as the greatest sculptor since Michelangelo. More than 40 of his powerful bronze sculptures will be exhibited in the Bloch Lobby from Oct. 1, 2011 through June 3, 2012 in Rodin: Sculptures from the Iris and B. Gerald Cantor Foundation. Avid Rodin collectors, B. Gerald and Iris Cantor amassed more than 750 bronzes, marbles, plasters, prints, drawings and ephemera by and about the artist over the years. Their foundation includes among its aims the promotion, understanding and appreciation of Rodin’s achievements.

“This exhibition is a celebration of the importance of sculpture at the Nelson-Atkins,” said Director & CEO Julián Zugazagoitia. “We have modern Henry Moore and Roxy Paine works in the Sculpture Park, and the Museum has several sculptures from the Nasher Collection, all generously donated by the Hall Family Foundation. And now we recognize the birth of Modernism with these dynamic sculptures by Rodin.”

The first exhibition in the Bloch Lobby was Roxy Paine’s modern Scumaks April 29–Aug. 28, produced from a sculpture-making machine. This second lobby exhibition bridges the contemporary work of Paine and the modern classicism of Rodin.

“Rodin’s innovation stems from his dynamic modeling technique, which emphasizes the movement and emotions of his subjects,” said Nicole Myers, associate curator of European Painting and Sculpture. “His insistence on the expressive potential of the body over a simple transcription of its appearance made his sculptures controversial, even scandalous at times.”

Rodin’s provocative sculptures are highly expressive of the human body, and he sought to convey such universal conditions as love, longing, reverie and despair.

“Rodin’s capacity to capture the human spirit in all its nuances was unrivaled,” said Myers. “He was one of the first artists to consider fragments and partial figures to be complete works of art capable of expressing even the most complex thoughts and emotions. His pioneering sculpture is today seen as a crucial link between traditional and modern art.”

The sculptures are divided into three thematic groups: the Gates of Hell section, which contains figures relating to the massive bronze portal that was Rodin’s most important commission; a group dedicated to sculptures of historical and cultural heroes commissioned as public monuments; and a series of isolated hands that express different states of being.

Rodin pioneered many studio practices, creating models in wax, clay and plaster that he would fragment, multiply, recombine, enlarge and reduce. This unorthodox working method allowed the artist to produce a startling range of sculptural effects, examples of which will be on display.