The Treasure of Ulysses Davis 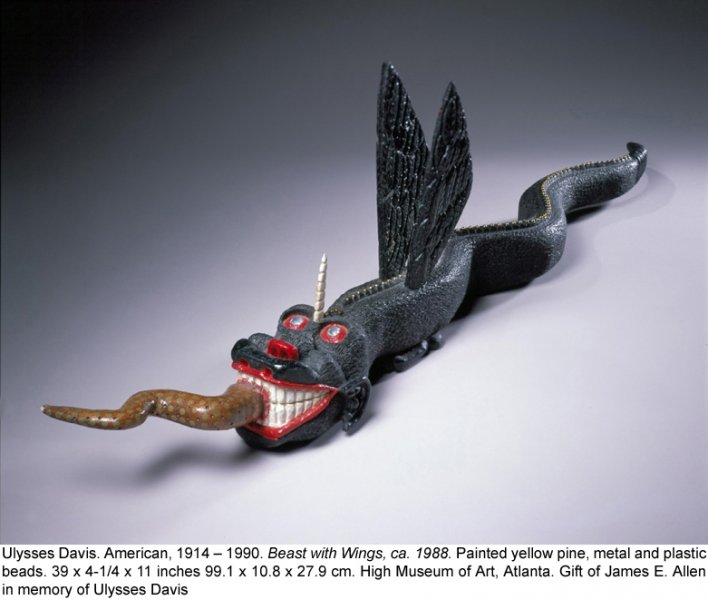 [ad#lb]
The first major traveling exhibition of works by Ulysses Davis in more than 25 years premieres at the High Museum of Art this December. Davis was a barber in Savannah, Georgia, who was also a selftaught
woodcarver of remarkable talent. He created a body of highly refined sculpture that expresses his humor, dignity and deep faith. The exhibition offers an opportunity for audiences to appreciate Davis’ remarkable work, which is rarely seen outside of Savannah.

“The Treasure of Ulysses Davis,” which was organized in collaboration with the King-Tisdell Cottage Foundation of Savannah, Georgia, features approximately 115 works drawn from both collections and select private lenders. It is accompanied by the first significant catalogue dedicated to Ulysses Davis. Opening in Atlanta December 6, 2008, “The Treasure of Ulysses Davis” will remain on view through April 5, 2009, before traveling to the American Folk Art Museum in New York and other national venues to be announced.

“The High is deeply committed to folk and self-taught art. We are the only major museum in North America to have a curatorial department specifically devoted to the field,” said Michael E. Shapiro, Nancy and Holcombe T. Green, Jr. Director of the High Museum of Art. “We believe that Davis’s work is sure to excite visitors with its energy, whimsy and drama.”

“The Treasure of Ulysses Davis” includes representative works from every genre in which Davis worked: portraits of U.S. and African leaders, religious images, patriotic works, carvings influenced by African forms, fantasy, flora and fauna, love, humor, abstract decorative objects and utilitarian objects such as canes and furniture. The exhibition features Davis’s best-known artwork, a series of 40 carved busts of all the U.S. Presidents through George H. W. Bush from the King-Tisdell Cottage Foundation collection. Other highlights include his largest sculpture, a moving depiction of “Jesus on the Cross,” from the High’s permanent collection, and a varied selection of Davis’s fantasy work—his “Created Beasts” and “Creatures from another Planet.” A range of rarely seen carvings from private collections will also be on view.

Approximately 75 carvings in the exhibition are on loan from the King-Tisdell Cottage Foundation, which acquired most of Davis’ work after he passed away, fulfilling his desire to keep his body of work intact. The exhibition also includes 10 works from the High’s permanent collection and a selection of pieces owned by other museums and collectors. The title is inspired by Davis’s own reflections on why he rarely sold his work: “These things are very dear to me. They’re a part of me. . . . They’re my treasure. If I sold these, I’d be really poor.”

“In many ways, Ulysses Davis’s artwork is a paradox,” says Susan Crawley, the High’s Curator of Folk Art. “Its sources could range from prosaic advertising images to the artist’s extravagant imagination, its moods from whimsical fantasy to solemn dignity, its forms from lavishly ornamental to radically simplified. Yet despite these extremes, it is always recognizable as his.
Davis’s work is widely esteemed but too rarely seen.”

During his lifetime, Davis carved more than three hundred wood figures, reliefs, and furniture pieces, ranging in height from six to over 40 inches tall. He often used stacking boards from freighters, which he reduced with a hatchet (later a band saw) before refining the forms with chisels and knives, many of which he made himself. To add textural details he sometimes used tools of his barbering trade, such as the blade of his hair clippers, or stamps he had learned to fabricate during his career as a railroad blacksmith’s assistant.

Ulysses Davis
Ulysses Davis was born in 1914 in Fitzgerald, Georgia and began to carve as a child. He left school early to help support his family by working for the railroad. After being laid off in the early 1950s, he began barbering in a shop he built behind his home in Savannah, Georgia, carving figures from wood in his spare time. He decorated the outside of his barbershop, which he filled with his reliefs and freestanding carvings.

A group of 50 Ulysses Davis sculptures was featured in the seminal touring exhibition “Black Folk Art in America: 1930–1980,” presented at the Corcoran Gallery of Art in 1982. Examples of Davis’s carvings have also been included in exhibitions such as “Rings: Five Passions in World Art,” at the High during the 1996 Olympic Games; and “Missing Pieces: Georgia Folk Art, 1776–1976,” at the Library of Congress in 1978.

Exhibition Organization and Support
“The Treasure of Ulysses Davis” is organized by the High Museum of Art in collaboration with the King-Tisdell Cottage Foundation of Savannah, Georgia. This exhibition has been made possible by the National Endowment for the Arts as part of the American Masterpieces: Three Centuries of Artistic Genius initiative and generous support from The Henry Luce Foundation with additional support provided by The Judith Rothschild Foundation.

Folk Art at the High
The High is distinguished as the only major general museum in North America to have a curatorial department devoted to the field of folk and self-taught art. In 1996 the High’s folk art collection expanded in size and scope through the gift of the T. Marshall Hahn Collection. In 2002 and 2003, the collection was further enhanced by Museum patron Judith Alexander’s gift of more than 130 works by Atlanta artist Nellie Mae Rowe. With a total of 744 objects, including indepth holdings of the art of Thornton Dial and Ulysses Davis and monographic surveys of the work of the Reverend Howard Finster and Bill Traylor, the High’s Southern folk art collection is considered to be among the top five in the nation.

Christo and Jeanne-Claude: Works in Progress with Q+A The Munich Secession and America