Jessica Goldfinch: Holy Cards and Other Versions of Mortality 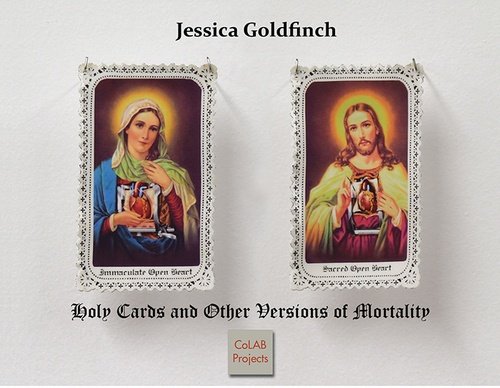 [ad#lb]
“Many religious myths have parallel storylines and meaning, and are thought to have the same historical point of origin. To explore this complex nature of religion, the Holy Card series collapses religious concept and imagery into one ideal, incorporating iconography from the Egyptian bird god Horus to Michelangelo’s Pietà, as well as other religious signifiers such as the Christian cross, the veil of Muslim faith, and the Hindi multiple-armed figures. In repealing the fourth-century Nicene Creed and humanizing the divine, the series is intended to depict humanist “religious” imagery that fits human concerns and needs more truthfully in our times. These works are meant to investigate the commonalities of humanity and to dissect the global clash of cultures and values present in our world today. Although the works illustrate the mystery and beauty of religion, they also are intended to be ironic and secular — an attempt to humanize the concept of “god.”– Jessica Goldfinch

About the artist:
Growing up in an urban commune in 1970s New Orleans, Jessica Goldfinch was exposed to unconventional worldviews from a very early age. From her elementary school years at the countercultural Free School through her graduate studies at the University of New Orleans, Jessica focused on studying world ideologies and creatively incorporating them into her art. Jessica’s artistic curiosity has led her to travel to places as diverse as Nicaragua, Indonesia, and central India, and she has frequently incorporated both iconographic elements and an Asian sense of balance in her work.

Raised as a Secular Humanist but schooled in many other religions from her upbringing, academic studies, and travels, she is fascinated with blind faith as well as religious artwork from an outsider’s perspective. Religious views of mortality infuse her work, and are often framed in scientific depictions of issues of life and death.

Jessica Goldfinch received her MFA in Sculpture, BA in Fine Arts and BA in Sociology from The University of New Orleans. Since 2000, her artwork has been exhibited in over 40 different museums, universities, art centers and galleries in New Orleans, throughout the gulf coast of the United States, Washington, DC, New York and Europe. Throughout her exhibition history, Jessica Goldfinch’s artwork has been reviewed extensively in the Times-Picayune, Gambit, and New Orleans Art Review. Her work has also been reviewed regionally in the Mobile Register and Gulf Coast Review, nationally in Art Papers, and internationally in the Osterreich Journal (Austria).