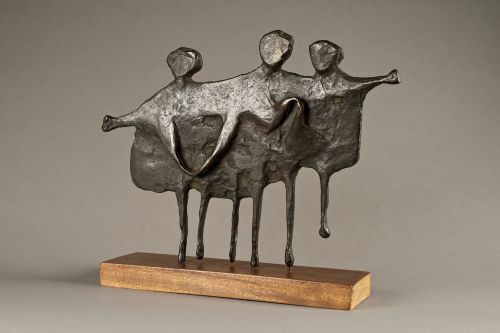 In March 2012, Robert Bowman Modern will be holding a selling exhibition of the greatest Modern British Sculptors. 2012 marks the 60th anniversary of the seminal 1952 Venice Biennale that first introduced the exciting work of a new group of young British sculptors including Kenneth Armitage, Lynn Chadwick, Bernard Meadows, Edouardo Paolozzi and William Turnbull.
These sculptors had emerged in the wake of the older Henry Moore immediately after World War II. Their work was characterised by the spiky, twisted forms famously described by the art critic Herbert Read as the ‘Geometry of Fear’. The exhibition is an exploration of the period and includes work by Kenneth Armitage, Michael Ayrton, Lynn Chadwick, Jacob Epstein, Elizabeth Frink, Barbara Hepworth and Henry Moore. Prices will start at £10,000. Robert Bowman Modern is acknowledged as London’s leading modern British sculpture gallery, and Robert Bowman is the UK’s foremost dealer of Rodin sculpture.

Henry Moore is regarded as one of the greatest sculptors of the 20th century and was unchallenged throughout his career as the most celebrated British sculptor of his time. Throughout his career his sculpture centred on abstracted depictions of the female form, most notably mother and child and the reclining figure. The Tate held a major retrospective of Moore’s work in 2010. ‘Reclining Girl’ (1983, 12.5 cm), which will be shown at Robert Bowman Modern is in a bronze edition of nine.

The joyful ‘Children Playing’ was made in 1953 when Kenneth Armitage was teaching sculpture at the Bath Academy of Art in Corsham (1946-56). The sculpture was modelled in plaster for casting in bronze and was made in an edition of six. It is one of a series of works, beginning in 1948, in which the artist joined two or more figures engaged in everyday, communal activities, into a simple mass sprouting arms and legs. He commented that ‘…joining figures together I found in time I wanted to merge them so completely that they formed a new organic unit – a simple mass of whatever shape I liked containing only that number of heads, limbs or other detail I felt necessary.’ The artist has also noted how the flat form of this work (and of others of the period) relate to the forms of aircraft: during World War II Armitage had been in charge of a War Office School of Aircraft Identification. Another cast of the same work is in the collection of the Scottish National Gallery of Art.

Another highlight of the exhibition is Elizabeth Frink’s ‘Rolling Over Horse’. Frink’s affection for horses stemmed from her country childhood in Suffolk. One of the leading lights of the post-war school of British sculptors, her work is characterised by her scarred surfaces created by repeatedly coating an armature with wet plaster; each coating is distressed and broken, eliminating detail and generalising form. Dated 1976, Rolling Horse is an edition of nine.

A further highlight of the exhibition is Epstein’s portrait bust of Albert Einstein. Epstein was undoubtedly the most versatile and famous portrait sculptor of the twentieth century. The Einstein bust is the most impressionistic of Epstein’s portraits partly as a result of the speed with which the work had to be made, but also because of a conscious decision to play up to the Rembrandt-esque humanity of his head. The deeply broken surface, in which each modelling gesture is distinctly visible, results in a sculptural impasto. Other casts of this sculpture are in the following public collections: The Tate (currently on display at the Victoria and Albert Museum), The Fitzwilliam Museum, Hirshhorn Museum, Princeton University and The Science Museum.