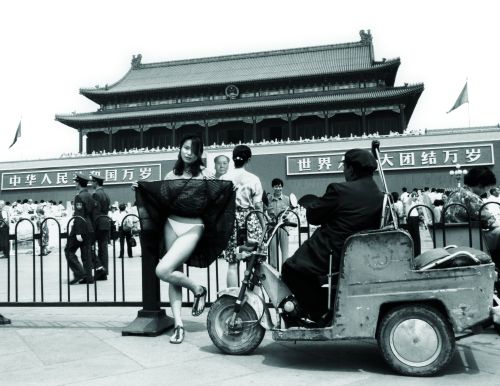 Ai Weiwei is no “narrow” artist. He is not an artist who dedicates himself to a certain issue, develops a vocabulary, and then, step by step, delves into and molds the chosen topic. Ai Weiwei is a generalist, committed to friction with reality and forming realities. And so as a sculptor, conceptual artist, photographer, architect, interview artist, and social and cultural critic, he is a seismograph of current topics and social problems, who, as a great “multiplier” and communicator, channels life into art and art into life.

Ai Weiwei was born in 1957, the son of poet Ai Qing. Following his studies at the film academy in Beijing, in 1978 he was a cofounder of the artist group The Stars, which rejected socialist realism and advocated artistic individuality and experimentation in art. In 1981 Ai Weiwei moved to New York, where he studied at Parsons School of Design under the well-known painter Sean Scully. During his stay in New York, he discovered artists like Allen Ginsberg, Jasper Johns, Andy Warhol, and, above all, Marcel Duchamp. Duchamp is very important for Ai, because for him art was a part of life. During this time, he produced his first readymades and thousands of photographs that document his stay in New York and the Chinese artists he was friends with there. In 1993, after his father became ill, Ai Weiwei returned to Beijing. In 1997 he co-founded the China Art Archives & Warehouse (CAAW), marking the beginning of his involvement with architecture and in 1999 Ai Weiwei built his studio house in Caochangdi. In 2003 he founded the architecture studio FAKE Design. He collaborated closely with the Swiss architects Herzog & de Meuron on the construction of the Bird’s Nest, the Beijing Olympic Stadium, which has already become an emblem of Beijing.

In a media-saturated world, Ai Weiwei is also aware that he can only have an effect in China and the world if he is present publicly as an intellectual. He does this in that he invests an enormous amount of time in working with the media as a gifted communicator—including his various blogs as part of this. He is reality and generates reality. In many senses, his operation fulfills Joseph Beuys’s concept of “social sculpture.” The exhibition in the Fotomuseum Winterthur intends to focus on and deal with the diversity, multivalence, and interlacing of Ai Weiwei: The artist as a real network, as a company, as a social and cultural critic, as political voice, as social receptacle.

The Fotomuseum Winterthur will show the following photographic works: his earlier photographs from New York; his first photographic art projects; his documentary photographs which document the rapid changes in Beijing, the demolition of the old, construction of the new Beijing; his photographs of the “Fairytale”-project with 1,001 Chinese people visiting Documenta 12; his blog photography, which follows the course of his activities like a notebook, like a visual record of his actions and reactions. This exhibition will be the first large-scale photography and video exhibition of Ai Weiwei’s anywhere in the world. After Winterthur, the exhibition will move on to Jeu de Paume in Paris.