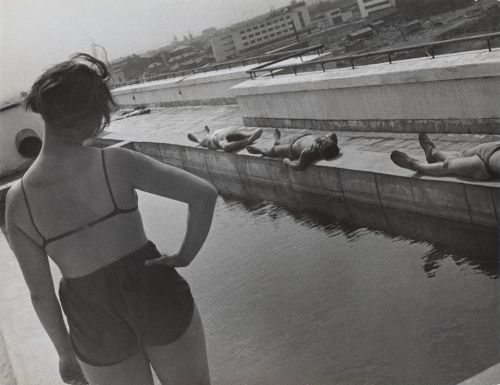 Modernism made photography what it is. It gave it self-confidence and made it trust itself. Self-confidence because photography in the 1920s recognized and developed its own possibilities and qualities: a probing vision of the world, an investigation of the visible reality from various perspectives, direct, clear, from above, below, behind, from the front, but without references to the pool of art history. Russian Constructivism is an important part of this great shift.

In 1924, Alexander Rodchenko, already known as a painter, sculptor, and designer, conquered traditional photography with the slogan “Our duty is to experiment!”. This resulted in a reconsideration of the concept and role of photography. Conceptual work entered the stage. Instead of being an illustration of reality, photography became a means to visually represent intellectual constructs, and the artist became an “artist-engineer”.

Yet Rodchenko was much more than a dynamic image maker. He wrote manifestos to accompany almost every one of his picture series, tirelessly promoting his concept of Russian Constructivism to the world. Destabilizing diagonals, harsh contrasts, tilted views, and picture and text collages are design elements found in his photographs. To this day they form, together with his texts, a unique document of the indefatigable artistic energy that is also manifested in Alexander Rodchenko’s posters, invitation cards, and publications.

This exhibition of the great Russian’s work has been developed in close collaboration with the Moscow House of Photography and the curator Olga Sviblova. An English-language catalogue with German supplement will accompany the exhibition.