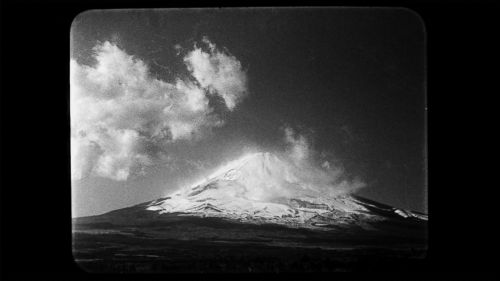 The English pharmacist and meteorologist Luke Howard wrote in 1802 in the preface to his manuscript On the Modification of Clouds: “Clouds are subject to certain distinct modifications, produced by the general causes which affect all the variations of the atmosphere; they are commonly as good visible indicators of the operation of these causes, as is the countenance of the state of a person’s mind or body.” Eighty years later, meteorologists had still not reached a consensus on how to classify, label, and read the forms of clouds. It was during this time that scientists first began using photography to record and measure clouds. With its help, they attempted to gain precise and accurate images that would provide insight on the interplay between clouds and the atmosphere and which could be used to create and convey a classification of cloud forms.

The exhibition CLOUD STUDIES – The Scientific View of the Sky presents six stages of meteorological cloud photography, from its infancy in the 1880s – in Switzerland with the first images by Albert Riggenbach photographed from Mount Säntis – up to the newspaper images in the United States that were captured by the first weather satellites in the 1960s. At the beginning of the 20th century, cloud formations and cloud systems were investigated foremost by the military and led to fundamental insights into interrelated weather situations.

CLOUD STUDIES – The Scientific View of the Sky is a rich collection of photographs, notes, records and atlases from diverse research sources and depicts the origins of contemporary weather forecasting. Each of the six stages represents a certain scientific and photographic perspective on clouds.