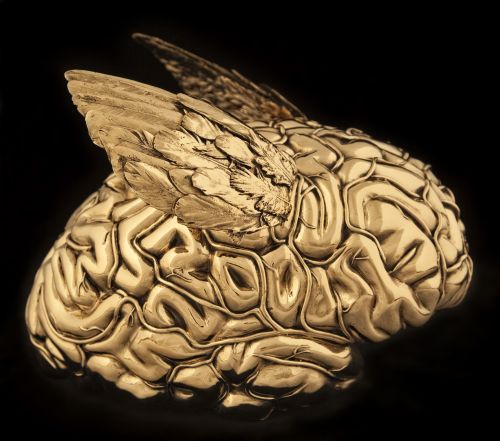 The exhibition is devoted to the precious metal gold and its use in art. Displaying 200 works by 125 artists, this comprehensive show staged in the Lower Belvedere, the Orangery, and the Palace Stables highlights various applications of the shimmering metal. Since the Middle Ages, there have never been more artists working with gold than today. On view are familiar examples and numerous new discoveries, including works by Stephan Balkenhol, Georg Baselitz, Willi Baumeister, William Blake, James Lee Byars, Sylvie Fleury, Richard Hamilton, Yves Klein, Imi Knoebel, Emil Orlik, Gerhard Richter, Gerwald Rockenschaub, Giandomenico Tiepolo, Victor Vasarely, Andy Warhol, and Franz West.

“Gold fires the spirit of life, stimulates the heart and blood, and bestows greatness and vigour.” (Paracelsus, 1493–1541)
Gold has always held a great fascination for mankind. A symbol of light associated with the sun, it played an important role in all advanced civilizations and was used as a material of the gods, rulers, and the aristocracy. The greed for gold, however, was also a reason for wars, looting, and conquests. In times of crisis, gold is still considered a stabile investment.

In art production, gold was particularly frequently employed during the Middle Ages, yet in the following centuries disappeared from the visual arts almost entirely. It was only in the second half of the twentieth century that many artists took to working with gold again. Exhibition curator Thomas Zaunschirm: “Until a few years ago, it was practically unknown that nowadays there are more artists working with gold than in the centuries after the Dark Ages. Surprisingly, many artists feel this is the infringement of a taboo. They are regularly confronted with criticism ranging from decorative kitsch to elitist traditionalism. The material’s charm lies in its polarity between
immediate contemporariness and a number of associative historical reflections. The startling variety of aesthetic positions, which has never before been presented so comprehensively, also calls for a revision of art historical research on the gold ground. The dogmas of sacrality and spirituality commonly linked to this precious material can no longer be upheld and have turned out to be an invention of the twentieth century.”

“The Belvedere is particularly suitable as a venue for such a comprehensive presentation on the subject of gold,” emphasizes director Agnes Husslein-Arco, “not only because gold runs like a red thread through the various collections and the architecture of the Belvedere palaces, but also because the show juxtaposes traditional visual elements with contemporary art.”