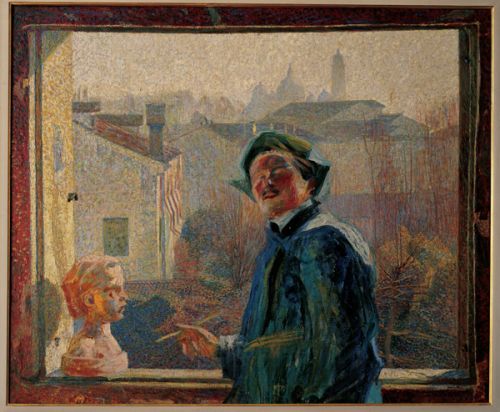 Divisionism represents one of the most exciting periods enjoyed by Italian art during the last centuries and now, at last, it is being celebrated in an important exhibition with a new slant and a choice of works covering the period between 1890 and the aftermath of the Great War.

During the years when Signac and Seurat were “pointing” Neo Impressionism in France, in Italy too various artists were
engaged in “dividing” complementary colours. This they did with great originality, interpreting in masterly fashion that new modern light underscored by the exhibition’s subtitle. Thanks to these experiments the artists working at the
threshold of the 20th century were able to confront, with techniques often both audacious and courageous, the emerging
trends of the new century. These ranged from an altered relationship with rural life to the evolution of the modern city, from scientific discoveries to impending social unrest.

Divisionism forms the first real break with past styles before the arrival of the avantgarde movements. In its Italian version, the pointing and coloured bars employed in France became jagged filaments, more likely to superimpose rather than to lie alongside each other. What really stands out as different, however, is the spirit.

This new painting technique, in fact, more than others, permitted the expression of that intimacy, merriment, spiritualism, symbolism, ideology, even political, those sentiments, passions, needs, in short, which united that generation of artists. The result was painting full of light, colour and especially of emotion.

Gold Jack Storms: A Cold Glass Sculptor — One of Only Three in the US!