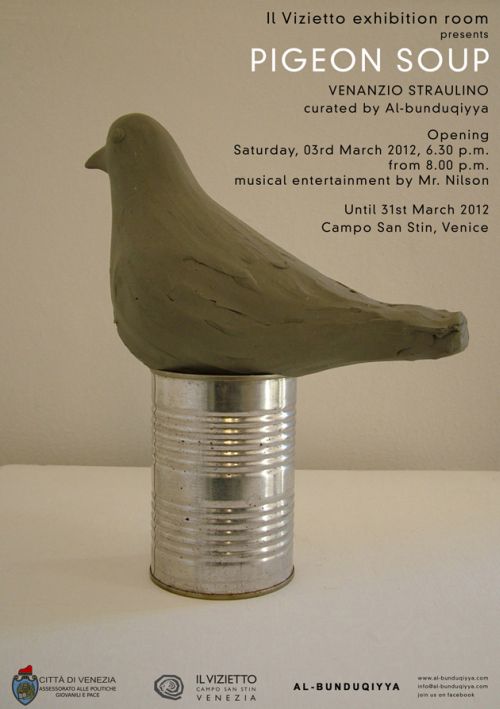 Il Vizietto is pleased to present Pigeon Soup, an exhibition by Venanzio Straulino curated by Al-bunduqiyya.

In his research the artist uses an ironic and subversive minimal language, dry for its tension.
Playing with the object’s function, he never reverses or distorts it; rather, he uses the image
as a subject, grasping a potential humor which is an integral part of the reason why the object was created and took a certain shape.
By doing so, he also reveals its political/ social / economic function. It makes us feel responsible for our daily actions imposed by the urge to fulfill our needs.
The object remains genuine and surrenders to its everyday use with amused involvement. It is the act of the artist that creates the paradox and consequently a misunderstanding.
The artist changes the perspective without denying the objects’ right to exist: in his works elements are arranged according to apparent nonsense, materials and oil colours contrast, bringing out, as a result, the object’s need to belong, to recognize itself and be recognized. That is the only way to the perceive its existence. The presence of time, however, is palpable, dense, and the myth becomes a story.
Venanzio Straulino’s work is a focused intervention that enables us to think about the surrounding world as creators, as products of the consumption of our gestures. Rather than invite us to become aware, the artist shows us how we, more or less consciously, are responsible for our actions.
Art teaches us to look at things and build relationships with them. Those relationships can be affectionate sometimes, but can also be positively detached in other cases. An instrument of criticism which ables us to analyze the political and social role of images and to develop a personal and collective awareness of reality.