French Twist: Masterworks of Photography from Atget to Man Ray 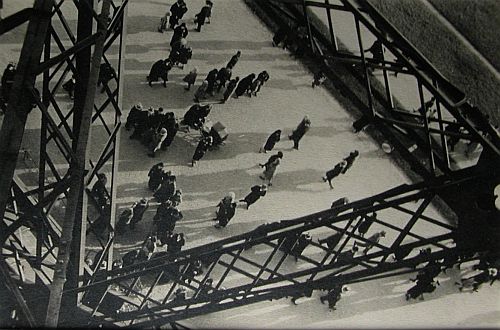 In the early 20th century, between the two World Wars, Paris saw a fervor of change. From 1910 to 1940, the city became a creative epicenter for artistic exploration, attracting international avant-garde artists–including photographers experimenting with Surrealism, Modernism, and the new reportage. French Twist: Masterworks of Photography from Atget to Man Ray, on view at the Delaware Art Museum from June 29, 2013 through September 15, 2013, features 100 vintage prints from this golden age of French photography and explores the variety and inventiveness of native and immigrant photographers working in France in the early 20th century.

This exhibition presents a number of themes that capture the flavor and nightlife of Paris at this exciting moment. “Life of the Streets,” “Diversions,” and “Paris by Night” are just some of the topics that these masterful photographs explore. Visitors will experience Eugène Atget’s lyrical views of Paris streets and gardens, Man Ray’s surrealist experiments, and Henri Cartier-Bresson’s pioneering photojournalism, as well as works by Ilse Bing, Brassaï, Jacques-Henri Lartigue, André Kertész, and Dora Maar. Many of these artists settled in France for life, while others, fleeing the Nazis, brought their Paris-trained sensibilities and influences to America.

French Twist is the first major traveling exhibition hosted by the Museum since 2008 and features Michael Mattis and Judith Hochberg’s unique collection of vintage photographs.

“I am so excited that we are able to present this important exhibition of historical photography,” says Delaware Art Museum’s Heather Campbell Coyle, Curator of American Art. “Traveling shows like this allow us to introduce different types of art to our visitors. The collection is outstanding and the photographs chronicle a fascinating time in history and art. We just do not have this kind of work in our permanent collection and it’s thrilling to bring it to Delaware.”

Along with the exhibition, the Museum will host a variety of French-themed summer events capturing the essence of the era, including a Member’s Preview Party followed by an event that will be open to the public. Guests will sample delicious tastings, enjoy lively entertainment, and embark on an exclusive tour of the exhibition with the curator (see full event listings below).