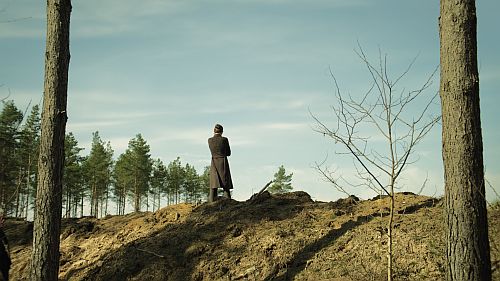 From May 8 to June 19, 2013, as part of its Projections series, the Musée d’art contemporain de Montréal is presenting Omer Fast’s work Continuity (2012) in the Beverley Webster Rolph Hall. Omer Fast is among those contemporary artists whose goal is an in-depth analysis of the space and narrative form of cinema. Employing a documentary form that fuses personal accounts, reportages, interviews and reenactments, his films often feature “protagonists” of recent wars and armed conflicts. Continuity  a disturbing and unsettling blur of fact and fiction  is often described as a work about loss and grief.

The narrative of Continuity opens with images of a couple driving from their home to a train station to meet their son (Daniel), just back from Afghanistan. But what strikes viewers first as an ordinary family reunion proves to be a ritual enacted by the couple, who hire a series of young male escorts to play the role of their son, killed in the war. The scenario is actually played out three times, with different actors taking the role of Daniel, so viewers are offered several versions of the same story. This circular structure gradually creates a bizarre atmosphere where coherence is lost and it becomes almost impossible to distinguish the real from the unreal.

Omer Fast, who was born in Jerusalem in 1972, lives and works in Berlin. Continuity was presented for the first time at dOCUMENTA (13), held in 2012, in Kassel. The artist studied at Tufts University and Hunter College, in the US. He has held recent solo exhibitions at a number of prestigious institutions, including Moderna Museet, Stockholm (2013), The Power Plant, Toronto (2012), the Wexner Center for the Arts, Columbus (2012), Kölnischer Kunstverein, Cologne (2011), the Cleveland Museum of Art, Cleveland (2010), and the Whitney Museum of American Art, New York (2009). He participated in the Whitney Biennial in 2002 and 2008. His film Five Thousand Feet Is the Best was presented for the first time at the 54th Venice Biennale, in 2011, and subsequently at DHC/ART in Montréal, in the exhibition Chronicles of a Disappearance. Omer Fast is represented by gb agency, Paris, and Arratia, Beer, in Berlin.